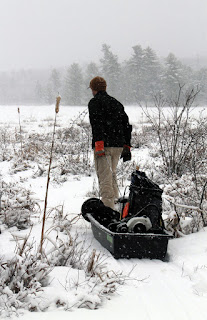 My old Jiffy ice auger coughed, wheezed and finally sputtered to life like an asthmatic struggling for a last strained breath at a dust mite convention. Loaded with last year’s “un-stabilized” ethanol fuel and operating in an ambient temperatures just above freezing, the poor old girl’s carburetor strained to maintain a healthy purr. Despite her initial complaints, the beast to tore four impressive ten inch holes through the ice and in the process, just about rattle every filling out of my skull. Then suddenly and quite unexpectedly something inside the machine made a loud “clank”, the motor whined, bucked and then died. A quiet calm settled onto the lake, as the last echoes of the augers final belches of exhaust spewed out of its muffler. This incident marked for me the end of an era, a final goodbye salute to an old friend. It also proved to be the last time I ever picked up a gasoline powered ice auger.
ION Ice Auger ROCKS!
Years ago, I would have scoffed at the prospects of an “electric” powered ice auger but the Ion Electric Ice Auger is an amazing piece of equipment. Powerful, fast and QUIET, the 8 inch ION will drill up to 40 holes through 2 feet of ice on a single charge. At just 22 pounds, the ION is just shy of half the weight of my old gas powered ice auger and boasts special blades that create smooth breakthroughs and no jarring stops. Add the ION’s ability to reverse its blade and flush slush down the hole and it’s blatantly obvious that this auger should be on every anglers most wanted list. I purchased my ION about 4 years ago and since that time, the company has continued to make numerous updates and changes to the original ION to make it even more effective in cutting ice.