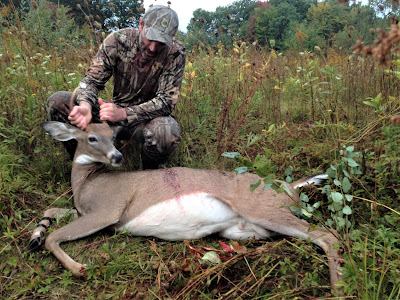 This hunting season the state’s expanded archery zones are open from September 8 to December 8, 2018. The intent of the expanded zones is to have hunting occur in areas that are not open to firearms hunting due to municipal firearms discharge ordinances. This provides deer hunting opportunities in locations in where deer populations can withstand additional hunting pressure without negatively impacting human safety. A number of these designated areas exist throughout the state of Maine but for the purpose of brevity, I am going to concentrate on the “Waterville” zone.

The Waterville zone includes the towns of Waterville, Benton, Fairfield, Oakland, Sidney and Winslow. Like most of the towns and cities within the expanded archery zones, these areas are comprised of intensive residential development interspersed with small woodlots. As such, a majority of the land in the expanded archery hunting area is privately owned and hunters are strongly encouraged to obtain landowner permission. The City of Waterville even has in place a very strict Public Safety Ordnance stating:

The Harbor Seal (Phoca vitulina) of the Atlantic Ocean, inhabits the coast beaches and islands from Maine south to Massachusetts. Occasionally, Harbor Seals can be found in Connecticut, Long Island, New Jersey and even as far south as North Carolina.

Individual Harbor Seals possess widely varied brown, silvery white, tan, or gray bodies dotted with a unique pattern of dark spots. The underparts are generally lighter in color. This highly evolved color pattern, helps camouflage the Harbor Seal and allows it to be extremely adept at avoiding predators. The Harbor Seal flippers are short yet extremely powerful. The head is rounded and the muzzle nostrils appear distinctively V-shaped. Adult Harbor Seals can attain a length of 6 ft and a mass of 300 lb. Most of this weight is comprised of blubber, a fatty substance that allows the seal to stay warm in the frigid waters of the Atlantic.

In Maine, birthing of pups occurs on shore, through the months of April - June. Female Harbor Seals bear a single pup, after a nine-month gestation, which they care for alone. Pups (immature Harbor Seals) are born well developed, capable of swimming and diving within hours of birth. Young pups begin life feeding on their mother’s milk but grow rapidly and within 4 weeks wean and begin eating a diet comprised of squid, carbs, clams and fish. Harbor seals have even been seen killing and eating several different kinds of ducks.

If able to successfully avoid predators like sharks, Killer Whales and Polar Bears, Harbor Seals have been known to reach a maximum age of 36 years old.