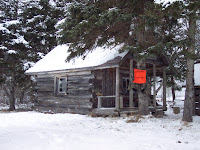 From the Old Cabin in the Woods . . . more from Bill Geagan.

Nothing on earth will rush a man back to his boyhood so swiftly and completely as these little expeditions with his son. He’ll feel like a kid, think like a kid, and act like a kid. He can’t help it. And it will do him good. – P. 175

The normal man will love it and he’ll love his son for making it possible. The son in turn will love him for arranging it, and more nourishment will be applied to the seed. – P. 175

There is little doubt that of all the activities in the great outdoors, fishing with hook and line has the strongest appeal for the boy. It also leads, I believe, in bringing father and son together. I don’t know of a surer way of reaching a boy, of winning his friendship, love, and even admiration, than taking him fishing, whether he’s your son or the kid down the street. – P. 181

As civilization surges cruelly onward to destroy his wonderful world . . . the barefooted boy fisherman still lives in a few remote places; in a shrinking wonderland which, it seems, must finally vanish. – P. 181

As the years roll along, more and more people are turning to fishing as a potent tonic for body and mind. It is the only activity where prince and pauper walk on common ground. The fishes play no favorites. – P. 182
Posted by Rabid Outdoorsman at 3/30/2009 4 comments: 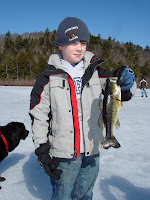 Much of the same goodness will rub off on the father who walks afield with his son. And like he who cuts firewood the father will be twice warmed for his efforts. Where he walks with the boy in Nature’s great corridors doesn’t matter, so long as he shares his interests and teaches sincerely and thoughtfully as best he can the greatness, honesty and importance of the wonders on display. – P. 170
Posted by Rabid Outdoorsman at 3/26/2009 1 comment: 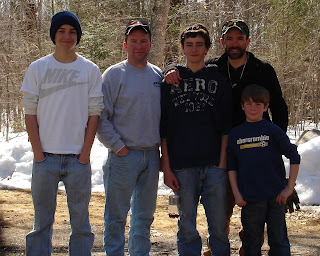 This weekend marked the last day of the 2008/09 ice fishing season. While we will still have "suitable" ice for at least a couple more weekends my time is a little less flexible. Had a great last weekend with temperatures in the upper 50s and my cousin and his boys joining me in Augusta for an awesome trip to one of my favorite perch ponds. Numerous fish were caught and many games of ice shoes were played! I really can't believe that yet another season has slipped away so quickly. 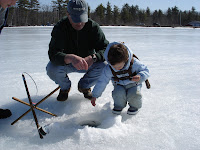 Highlights of this season include this picture taken during the previous weekend with my son (under 3 years old) ice fishing for the first time with me and his Papa. While I typically don't post pictures of my little ones I had to set aside my protocols to share this one photo of Papa and Grandson. Any Dad's out there who haven't taken their kids fishing get out there! We only have so much time to invest in the next generation and who will be there to support it if all our kids are happy sitting inside playing on the Wii! It is our responsibility to teach our kids about the outdoors so just do it!
Posted by Rabid Outdoorsman at 3/23/2009 6 comments:


This video documents the only fish we managed to land over the entire course of last weekend. As I often say that is why they call it fishing and not catching! 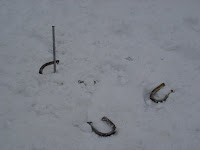 This impressive white perch is well shy of the current state record but specimens in this size category make for great eating. Immediately after catching we threw the fish into the fry pan and boiled it up with a healthy dose of Jamaican Jerk Sauce. As we all stood there playing a game we up here affectionately call “ice shoes” and picking small pieces of fresh caught fish from the frying pan I seriously had to wonder how life could get much better. 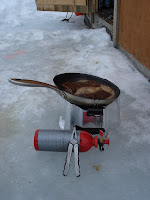 Much better did he say . . . seconds later MY flag went up and I battled for close to 10 minutes with a VERY nice size fish that I guess was a Northern Pike. Only as I pulled in the 12 pound mono leader did I begin to get nervous. Well concentrate on one thing and it will be something else that ends up biting you in the butt and that is exactly what happened. As I wrangled the fish delicately up the hole the hook caught on the edge of the ice lip and in a second the fish was gone . . .. lost inches from being fish chowder.

Friends asked me if I was “disappointed” and I had to laugh. Disappointed? Hardly! A beautiful day on the ice with family and friends eating good food and laughing till my ribs hurt . . . those days are hard to improve upon.
Posted by Rabid Outdoorsman at 3/12/2009 2 comments: 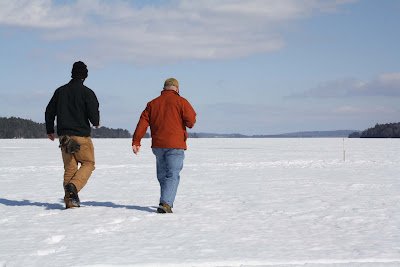 Ice Fishing on Great Pond in Kennebec County. The fish refused to bite but beautiful blue skies and the warmest day in as long as I can remember added up to pure ice fishing NIRVANA!
Posted by Rabid Outdoorsman at 3/11/2009 3 comments: 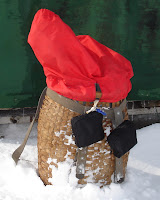 About 15 years ago I inherited the ash wood pack basket depicted in the attached picture from my Grandfather. Through the years this handy tool has accompanied me on many adventures into the wilds of Maine in pursuit of all manner of fish from great to small. There is a story to be told about the hard water fisherman and his personal choice of equipment conveyance. On a typical ice fishing outing all manner of device can be seen from 5 gallon plastic buckets, sleds and of course most typical and interesting of all the ash wood pack basket. Obviously, I am very jaded and opinioned with my outlook toward the “synthetic” crowd. These phonies skip around the ice with their plastic buckets in hand swinging them like a freaking purse. Of course I am totally poking fun so if anyone uses one of the synthetics please drop a comment defending yourself!

My particular basket is an heirloom and before it came under my charge it served close to (and I am guessing) 20 or more years under the care and supervision of my Grandfather. The old potbelly design is not typical of most of the pack baskets I see kicking around between my friends and none have close to the character of this old workhorse. As I look at many of the “modern” pack baskets many are already showing the signs of just 5-6 seasons of use. I have to wonder what has happened with the quality of the workmanship and the materials involved in creating these once amazing masterpieces. I wonder if in our disposable society “good enough” is what we have resorted to?

With barely any signs of perceptible wear I ponder if someday my two boys or maybe even their sons will one day fight over who inherits old Granddaddy Hitching's/Vose’s ice fishing pack basket!

For more on selecting and buying a packbasket click HERE.
Posted by Rabid Outdoorsman at 3/04/2009 7 comments: 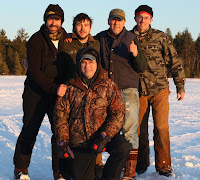 Through a dozen harassing phone calls I finally managed to get my brother to e-mail our fishing photos. Of all the photos filled with fish and smiling faces the one above is the one that will serve as my most treasured memory. A couple days spent with family members perusing a shared passion is always certain to create lasting memories. No matter how many fish that are caught in the end the enjoyment of any trip is the time shared between those individuals held dearest.

The picture above was taken on the last day of our "adventure" and as the sun set below the horizon and a chilly wind blew down my collar I wondered if I would ever be back to this place again. A decade and a half ago when I last walked on the hard waters of Pocumcus Lake I wondered the same thing and yet here I was again fishing the leviathans of the north. I am sure that someday in the not so distant future I will return . . .
Posted by Rabid Outdoorsman at 3/03/2009 5 comments: 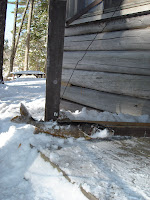 As we struggled to re-fill the wood box to have sufficient fuel to drive the stove through the frigid night the screen door to the camp provided a continued annoyance refusing to corporate and allow us to freely pass. As I approached the door with a particularly large armful of wood the door slipped off its ice covered door stop and slapped shut barring my entry to the cabin. It was at this point, that my cousin in a moment of frustration and pure brilliance grabbed one of the larger Mud Trout and plopped it down as a new door stop. Maybe it was the extreme cold or just the circumstances surrounding the situation but we all laughed over this maneuver for several minutes. 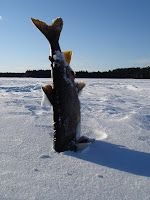 The next day fueled by my cousins inventiveness I decided that I would attempt to design and implement new uses for frozen Mud Trout. While certainly not quite as interesting as the door stop idea I thought my Frozen Mud Trout Sundial was a testament to what an individual can accomplish when they have to much time on their hands.

Disclaimer: Several fish were harmed in the making of these photos, however, none of them were left uneaten.
Posted by Rabid Outdoorsman at 3/02/2009 5 comments: