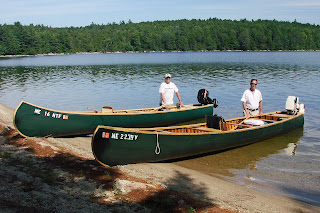 If you have ever rippled the surface of any of Maine’s truly Grand lakes, you would be hard pressed not to have encountered the large, green, iconic Grand Lake canoe patrolling these waters. In the course of Maine’s historic past, few emblems serve as better symbols of Maine’s rich sporting tradition and outdoor heritage than the venerable Grand Lake canoe. It has been coined by many as the quintessential Maine fishing craft and in over a century of service, been bestowed countless accolades and honors by its dedicated followers.

As a boy, I have fond memories of canoeing polypropylene canoes down the Kenduskeag, Machias and Moose Rivers but these adventures pale in comparison, to the day I took my first ride in a Grand Lake canoe. I remember cringing, as I set a small tentative gravel covered foot on the heavily varnished wood ribbed hull, fearful to scratch what appeared more an artists sculpture then the floor of a boat. After considerable prodding, by my patient Uncle, I finally settled into the handcrafted caned bow seat and laid my tiny hands on the finely crafted gunnels. Speeding up West Grand toward Pocumcus Lake, powered along by a comparatively small 9 hp Johnson outboard, I was amazed by our ability to out distance larger watercraft boasting twice the output of the Johnson. As we effortlessly sliced through the chop, the cool September wind whipped through my hair and I silently promised that one day I would own one of these majestic watercraft. 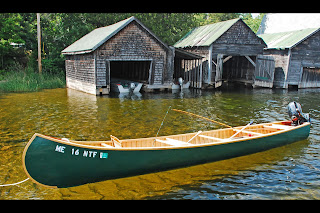 Early development,of this form of canoe, is credited to Herb Bacon and Joe and Bill Sprague, each man responsible for elaborating on the basic design, with his own unique style, adding the features each deemed most important. A testament to its form and function, it is still produced by a few remaining master craftsmen, each employing building techniques refined and perfected over decades. Constructed with intensive care, to successfully build a Grand Laker a man must not only be able to build a serviceable canoe but also one able to survive decades of hard use/abuse in the field.

Perfectly adapted, to its intended environment, the original design has undergone few perceptible changes since the canoe was first birthed sometime in the 1920’s. Still ribbed and planked with local cedar, trimmed with fine hardwoods and boasting a stern typically constructed from a single piece of strong dense mahogany, the craft appears more work of art then workhorse. Do not be fooled however by its intrinsic beauty, for the craft is powerful and capable in the water. While many others have borrowed from the original forms and managed to replicate the canoe, few have managed to duplicate. Novice craftsmen, who make sacrifices in the quality of materials or fail to build with loving devotion toward the craft, are simply building a big canoe and not a vessel worthy of the name Grand Laker. 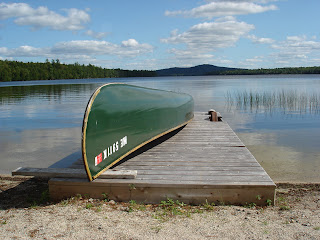 Despite the best that mother nature can and have thrown at these craft, the local residents operating them, know well their strengths and weaknesses, possessing a healthy respect for what they can and cannot do. There is a saying, that you should fear greatly the man who owns but one gun, for he most likely knows how to use it well. After generations of use, with some well cared for canoes handed down from father to son for several generations, it is not uncommon for a baby to have ridden, boy to have operated and man to now own the same canoe.

Some argue it is the pilots of these venerable craft, whom are the most critical and important component of their design, for it is their experience knowing how to accurately predict the weather, avoid the rocky shoals and innate connection to the canoe that creates such an impressively capable watercraft. Captained by a registered Maine guide, the Grand Lake canoe or simply “Grand Laker”, in the native tongue, is a notably handsome means of conveyance, with strength and size striking a perfect balance with its grace and agility in navigating often challenging bodies of water. 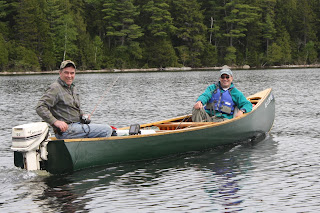 Sportsmen, unfamiliar with these impressive capabilities, will likely scoff at the idea a canoe would be stable enough to handle the extreme weather produced by some of Maine’s largest lakes. Guides, sports and mix of outdoorsmen owning these craft, can attest to how capable and comfortable they are during a long day on the water. When Maine’s fickle weather becomes ugly, turning an otherwise calm day on the water into a white knuckled escapade, where frenzied whitecaps threaten to swamp lesser watercraft, I would pick the Grand Laker as my escape vehicle.

In its most recent form, the twenty foot Grand Laker is capable of transporting three adults and gear comfortably and with its fine tracking in rough water and ability to draft less than 7 inches, it is perfect for everything from trolling for salmon to casting for small mouth bass. Its narrow profile and wooden hull make it maneuverable and light enough to get into boulder strewn fishing hot spots, unable to be navigated by heavy aluminum boats. Though quick and nimble, its wide berth still provides a stable platform for an angler to stand while casting or fly-fishing. Able to be outfitted in a variety of styles and configurations, it is not uncommon to see canoes rigged with fish finders, downriggers, rod holders and a number of other fishing implements. Lastly, no adventure in a Grand Laker would be complete, should it not contain packed neatly into its bow, all of the elements necessary to enjoy the infamous shore lunch. 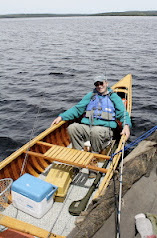 While still remaining a testament to the original blueprint, the traditional Grand Laker has not been immune to the winds of change. This truth is evident in the crafts most sizeable evolution, which occurred in the 1950’s, when outboard motors began replacing paddles as the preferred mode of propulsion. These “advancements”, forced the canoe’s previous artistically upswept double ends, to be replaced by today’s more utilitarian square stern. Modernization was repeated; around the same period, when the canoes high maintenance painted canvas exterior (still available today if requested by customer) was replaced with the easier to maintain fiberglass skin.

The boat will effectively manage engine sizes from 8-10 hp. Thinking of the specific needs and scenarios when/where it will be typically operated, the 9 hp engine seems the most popular selection and is a great fit. Some canoes are even fitted with an additional electric trolling motor, increasing the crafts maneuverability in close quarters. Due to its weight (averaging an empty weight of around 160 pounds) and size, the 20 foot Grand Laker is typically transported using a small boat trailer. Though light weight in comparison to the large aluminum v-hulls it would be impractical to expect to be easily loaded into the back of a pick-up truck or onto a roof top carrier. Trailers also have the added the benefit of allowing the canoes to remain loaded with equipment, gas tanks and motors easing deployment another day or at a different fishing location.

With trailer and motor the current price tag of a Grand Laker is just under $10,000, with some used models available for half that price. Still, owning one of these fine craft may not be an option for every outdoorsman. Watercraft produced by Oldtown canoe, offer sportsmen a less expensive option but will never compare to the beauty of the handcrafted Grand Laker. Better to save your pennies and go with the classic!