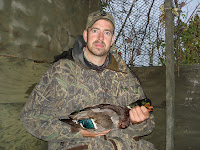 I haven’t slept well in the last week as the opener of the 2010 waterfowl season approaches. My slumber is thwarted by vivid visions of triples and vibrant green heads falling to my expert marksmanship. Alas if only some dreams could echo a flicker of reality.

Perhaps even more nerve wracking than my mental fatigue from my fitful evenings is the physical exhaustion I am suffering as I prepare the estate for a visit from the Honorable Potentate and Grand Puba . . . the most admirable and exalted President of Duck Power Incorporated. Yes folks, none other than the DuckMan will be joining me for the 2009/10 waterfowl opener.

As is the expected appointment of any host, to the anointed president, it is my charge to insure that all necessary and unnecessary accouterments and accompaniments are prepared and accounted. This includes a laundry lists of events, activities and proceedings that must be completed with military precision.

As I await the arrival of Mr. President, I begin to go over the checklist to insure every detail no matter how small has been rightly accounted. I drill the children with the proper sounds made by Mallards, Teal and Wood Ducks and insure they are holding their popguns with the “dangerous end” pointing in a safe direction.

As I frantically begin to pull together the last minute details, I hear the distant sound of tires slowly rolling up a gravel driveway and know that Mr. President has arrived. Hurriedly, I grab for the camouflage (Max 4 Adv.) carpet and unfurl it to the door of Mr. President’s transport. I take a deep breath and wait for the inspection to begin. Wish me luck!!
Posted by Rabid Outdoorsman at 9/30/2009 2 comments:

This story starts with the discovery of a water stained box recently rescued from my parents basement. On the outside, scribbled in faded permanent marker, were the words trapping supplies. Within the confines of the slowly disintergrating cardboard, were my old and well rusted leg hold traps.

Upon opening, I was immediately flooded with many happy childhood memories of outwitting fox and coyotes with dirt hole and scent post sets. I started trapping when I was 8, immediately becoming addicted. For me there was something deeply intoxicating about checking the trap line each early Fall morning. The anticipation of a wild animal caught by my "trickery" was an amazing experience for a young sportsman. At some point during my reflection, I determined that this trapping season I would once again try my luck at capturing a few wiley canines.

An examination of my old traps showed that the years had not been kind and only a few were servicable. The logwood dye had blackened and magically somehow managed to save a few #2 Victor coilsprings from certain destruction, wrought from several decades in a damp basement.

Equipped financially much better than I was in middle school, I put the heavily rusted antiques aside and invested in 6 new #2 coil springs by Bridger. Where trap design has changed little in the past 20 years the process for blackening and preserving them against the elements has changed significantly. "Speed Dip" is now the new dyeing method and takes minutes rather than hours. The only drawback is that traps must be aired out for months before they are ready for fox and coyotes. Due to time, I will be airing mine for one month so this year trapping may be an experiment in frutility!?!? I hope it is enough time!

Another major advancement, is the creation of "disposable" stakes. These wonderful creations, eliminate the need to use rebar stakes that were practically impossible to retreive at the end of the season or when it was determined that a set needed to be moved. These new stakes are driven with a special tool and then easily retreived by pulling on a second wire attached to the anchor that reverses the direction of the device and allows it to be easily extracted. Apparently, gone are my days of swearing and herniated disc that occurred with the removal process of the old stake systems.

With traps preped and supplies secured the next step in this process would be securing a trapping licence. I was worried that IFWs records would not include my adult trapping licence but they were able to find it and issue me a new licence in minutes!!

Lastly, if I do in fact manage to actually catch something, I secured a couple handmade stretching boards from an oldtimer at the recent trappers rendezvous in Sidney, ME. Yeah, I could have purchased a couple of those fancy wire stretchers but for me the wooden option was the best fit and reminds me of the ones I used to have as a youngster.

Well off to the wilds to pre-build a few cubby and dirt hole sets! Will keep you posted as the season opens on October 18th!
Posted by Rabid Outdoorsman at 9/28/2009 2 comments: 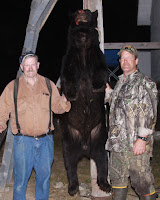 I just returned from a week in the remote wilds of Maine hunting bruins. Bear camp has become a new annual September ritual, with this being my third year. This season was spent with the fine folks and guides at Eagle Mountain Guide Service located in the center of the prime bear habitat of Washington County. This area of the state is comprised of dense spruce thickets, cedar swamps and thousands of acres of blueberry barrens. This unique geography creates a prime habitat of quality feeding and bedding areas for growing big bruins. 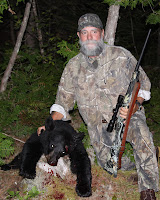 During the course of my stay, several bears were harvested ranging from a "good eatin" 100 to a monster 370 pound animal that required 6 men to stretcher out of the woods. One client even observed 10 different bear on his bait during the course of the week. He managed a shot on the final night with his single shot TC in 30-'06 firing hornary sst rounds in 180 grain. Unfortunately, after hours of tracking, by both guides and dogs over a course of two seperate days, it was unfortunately not recovered. Personally, I enjoyed watching a 120 and 200+ pound bear visit my bait site but was not offered an ethical shot opportunity on either animal.

My week was spent spending early mornings coyote hunting over endless tracks of blueberry barrens and afternoons and late evening assisting the guides with pulling off hides, butchering, packaging and icing meat, and assisting with the baiting process. All in all a wonderful learning experience.

Another highlight of my trip was the shooting of 5 different iron sighted and scoped hand cannons that several of the sportsmen had brought with them. With a range starting with the diminutative .357 (kidding) and ending with magnums just shy of .500 I was quickly educated in proper form and handling of these powerful wheel guns.

What did I learn?
Shot placement is key! Due to the close range shooting on a bear hunt rifles should be set to be dead on at 25 yards. For most rifle hunters typically shooting dead on at 100 yards this means you will be shooting several inches low. When this relatively small deviation is compounded by an excited shooter, a shot believed to be in the cross hairs can quickly move from critical to wounding. Practice elevated shots at close range before your hunt as bear in the thick maine woods typically do not allow hunters a second shot opportunity. Sportsmen can also increase their chances by studying placement charts and watching bears being shot with good placement on video. All bait sites are not created equal. If possible hunters being guided should clearly communicate to their service the size of the bear they are targeting. Are you looking for a smaller bear for the dinner table or a Boone and Crocket animal. The more information you provide, the better capable the guides will be in setting you up with getting a shot opportunity on the animal you wish to harvest. If open to the prospect, mail your guide service a trail camera and have them capture your bear digitally and e-mail you the photos. Some highly technical guide services will even have their own cameras and run this service anyway.

Low light conditions that occur when hunting bait sites in heavily forested areas become unhuntable up to 45 minutes before the end of legal shooting due to the loss of day light. This means your cross hairs will disappear, making an ethical shot impossible, way before you need to legally leave the woods. Quality optics, battery illumination and night vision all can work to assist hunters in dealing with the darkening conditions. 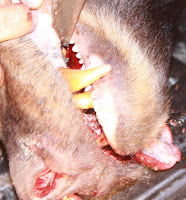 Scent control should be practiced through persistence and consistence. Be sure to practive excellent personal hygeine through the entire course of your week. This task becomes increasingly more complicated when hunting from remote hunting locations. Several companies sell handy no scent body wipes that can be used to eliminate body odors. When combined with no scent baking soda based deodorants and scent eliminating sprays sportsmen can gain a slight advantage in significantly challanging a bears sensitive nose.
Posted by Rabid Outdoorsman at 9/21/2009 No comments:

I can't deny that I didn't chuckle the first time I watched this video, however, as I began thinking about what I had just seen I began to feel quite differently. Apparently, over the years, I have been desentitized to the point where torturing animals on video is seen as humorous. Sad really and the more I have thought about it the more it has bothered me. As a hunter I believe in dispatching an animal as quickly and efficiently as possible. I realize that this process may not be perfect everytime and the possibility of wounding an animal is always present. Hunters, however, are NOT torturers nor do they receive any joy in seeing an animals suffer. In the end, I was glad I watched the video as it reminded me of who I am, who I am not and who I should strive to be. I encourage other sportsmen to keep these thoughts in mind as we enter hunting season. Please comment I am interested in others thoughts!