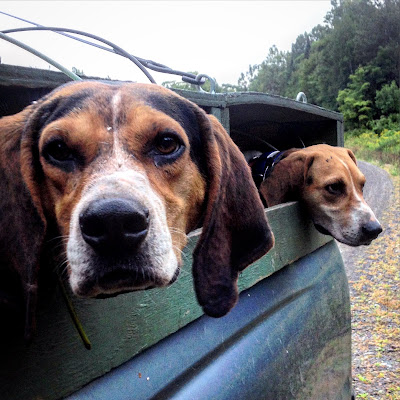 The echoing chorus of the pack, fractures the early morning silence and the chase is on. My heart rate quickens as the howls of the excited hounds reaches crescendo, indicating they are hot on the trail of a bruin. Early game camera pictures had indicated that a bear well in excess of 200 pounds had been a regular visitor to this particular bait site and I hoped the hounds were on his track.

As the sounds of the hounds grow distant, I wander over to the guide to examine his handheld GPS dog tracking unit. A true marvel, the GPS unit is capable of tracking the movements of each individual dog, as well as indicating when a dog is sitting (resting) or has treed a bear. Given the massive size of the territory we are hunting, I cannot fathom how difficult hounding must have been before these units and their predecessor’s radio collar telemetry were created. How a hounds man ever recovered his dogs after chasing a bear across this expansive country must have required a Herculean effort. Watching the hounds give chase to the bear on the small screen is addictive. The track of the hounds is overlaid on top of a detailed topographical map and shows the bear following streams and crawling through cedar bogs in an effort to evade the rapidly advancing hounds.

The Bluegill (Lepomis macrochirus) exists as a species of freshwater fish sometimes referred to as bream or brim and is a member of the sunfish family of fishes. Native to North America, Bluegills inhabit almost every body of water in the United States. While extremely prolific and able to thrive in a wide diversity of aquatic ecosystems, Bluegills prefer to inhabit shallow waters that contain larger rocks, tree stumps, logs and other underwater structure where they can seek protection from predators such as bass, northern pike, herons, snapping turtles and otters.

Bluegills average in length from 6-12 inches and weigh from 1-4 pounds. The Bluegill is thus named, for the dark blue coloration of the sides of its head and chin. Bluegills also possess a distinctive large black spot on the edge of both its gill plates. The belly of a female bluegill is a fiery yellow, while the belly of a breeding male is typically a rusty red color. The largest Bluegill ever caught was 4 pounds, 12 ounces and 15 inches long in 1950 and still stands as the all time record.

Breeding typically occurs in May-August in nests built by the male.  Males build nests by using their tails to create shallow depressions in shallow waters. Female crappies deposit eggs in these depressions. Males release milt to fertilize the eggs and eggs and sperm become mixed. After spawning, the male chases the female out of the area and guards the nest until the eggs hatch 5 days after initial fertilization. As fry grow into fingerlings and finally adults, they feed on a progressively larger and wider array of plankton, crustaceans, insects and small fish. Bluegills reach sexual maturity at one year, with those hatchlings fortunate enough to evade predators living for up to eight years in the wilds.