The Opening Day Buck and The Lessons Learned (Part 3) 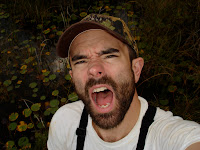 Sunday morning and I was up a full hour before my alarm, filled with new found optimism. Packing my waders, I jumped on the 4-wheeler and headed to last blood. Arriving well before the fist rays of light, I settled down under a young pine tree and quietly waited for the crows to appear. It was my hope that the sharp eyes of the crows and turkey vultures would point me to my deer. This trick had worked for me once before and I hoped it would work again. After waiting for almost an hour, the calling crows showed no set pattern and I donned the waders and headed into the alder bog. The bog was even worse than I had anticipated and visibility in the swamp grass and 10 foot tall alder saplings proved a significant challenge.

Struggling chest deep at times through the sucking mud, smelling of rotten eggs, I searched inch by inch through the bog until I was satisfied that it did not contain my deer. Frustrated by the situation, I struggled back to the shore and leaned back against a rock for a few minutes to reason out other options. I decided as a last ditch effort I would make a large swing around the perimeter of the site to determine if perhaps I would get lucky and stumble upon a hoof print in the mud or heavy indentations in the leaves. While I did find several tracks none contained blood. The heavy rains that had continued all through the night had wash away all traces.

Finally, at around 12:00 PM Sunday I returned to the house, disappointed but much wiser for the situation. Ultimately, despite how good a shot I would like to “believe” I had made, the reality had proven otherwise. Perhaps it was a small unseen branch, an adrenaline charged hand shake, a rapid pull of the trigger finger, a scope improperly set, a slip of a foot, a shot placed to low on the forward shoulder . . . the list goes on for reasons why deer are wounded each year.

The conclusion of this tale, occurred when I stopped by my neighbors on Sunday afternoon, a week from the original search, I was shocked to hear his tale of a small spike horn that had been found. A friend of a friend had been hunting approximately three miles and 180 degrees opposite the known direction the deer had last been moving and had stumbled upon the bloated carcass. Doing a little CSI investigative autopsy, he could see where a bullet had entered and clipped one lung. This certainly goes to show you the power a deer possesses even when critically wounded. Without a perfect shot that either hits the heart, both lungs or spinal column a deer is a powerful creature capable of dramatic physical feats to save its life. When hunting during the remainder of the season, please keep in mind my tale and make sure that your shots are true to save an animals possible suffering and to aid in a quick harvest. Thanks for reading!
Posted by Rabid Outdoorsman at 11/22/2010