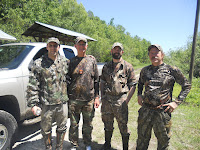 Battling oppressive heat, fire ants, tornado warnings, stampeding cows, trench foot and a curious panther that stalked to within 50 yards of my turkey decoys, were just a few of the exciting highlights of our 2011 Florida Osceola Turkey hunt. A normal man might ponder why any sane individual would subject themselves to this degree of abuse, in pursuit of game animals with the brain the size of an acorn. What they would be missing is the “unique” challenge hunting public lands in Florida presents to sportsmen.

Now you southern boys are going to have to cut this northerner some slack on these next few statements, lest you be invited to go sea ducking with me on the Atlantic in January while temperatures hover around a balmy 20 below zero. 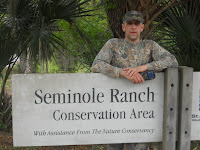 One thing we have certainly well learned from our past two seasons chasing Osceolas, is that the Floridian jungle is like being on a completely different PLANET compared to the boreal forests of Maine. In Florida, even the simple act of sitting down is a complicated by a laundry list of potentially lethal possibilities. Fire ants, poisonous snakes, spiders and a dozen different plants with venomous spikes are just a few of the horrors that await any sportsman lax about where he places his fanny. Added to these pleasures, was this year’s added excitement of the angry free-range devil cows populating Seminole Ranch. This spawn of Satan, we quickly learned, took great pleasure in charging any sleepy turkey hunters who had the audacity to approach field edges in the early morning darkness. Lesson learned, lit headlamps not only attract moths but also 1500 pound cud chewers. Long will be my fond memory of frantically trying to shut off my headlamp, whilst dodging 25 stampeding pissed off cows and attempting to keep my lower intestine from completing an uncontrollable act. All that was heard in the night’s perfect blackness, by my hunting comrades, were the dozens of heavy footfalls and the frantic yelling of a (rabid) maniac yelling WOAH COW!! Good times, good times! BTW, instantly be considered one of my close personal friends by throwing a steak or two on the grill this weekend! 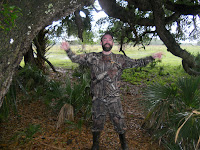 Throw into this season’s mix, of animal encounters, the unpredictable thunder and lightening storms, tornado warnings and hurricane force winds and you have all of the ingredients of a hunt that will eventually have you delusional, thrusting your arms skyward and screaming at the top of your lungs to God in heaven “Is this all you got”! Not that I would ever mentally digress to that degree of complete loss of self-control BUT I have this friend of a friend and that is all I am going to say. 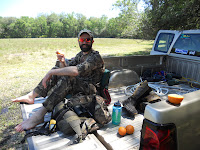 Seminole Ranch is outwardly an awesome place. Huge fields filled with snowy egrets, hawks and yes, even turkeys are sure to impress. As a hunter, it is easy to scout these massive open expanses and think that shooting a turkey would be imminent. Unfortunately, this could not be further from the truth. Seeing turkeys and getting one to within 40 yards are two COMPLETELY different things and public land Osceola toms are very unwilling to come to a call or set-up of decoys, no matter how convincing you think you might be. I am not going to say it won’t happen, only that it is exceedingly difficult.
Hunters have a MUCH better chance at scoring a bird by hunting roads, hiking paths and routes leading to and from roosting and feeding areas (the massive fields). Using the tactic of hunting pinch points, thoroughfares other natural funnels, to your advantage, you limit the areas that a wily tom can escape. If you are lucky, a gobbler may even wander in front of your barrel with no calling or use of decoys. If you think you can accomplish that task, you are getting the idea of what it is like to hunt Osceola turkeys. 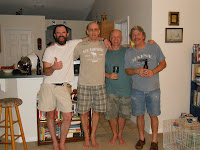 My best chances of scoring a bird, were first setting up 300 yards from another hunter who scored, second being surrounded in all directions by gobbling toms and third stalking a watering hole late morning that contained two hens. Each of these events, were they slightly altered or if fate decided to reward rather than punish me, could have potentially allowed me to score a bird. Unfortunately, time and knowledge of the area were ultimately against me and I now need to determine if I try for the Floridian resident Osceola again next season or head to Texas?!?!.
Posted by Rabid Outdoorsman at 4/22/2011