The month of April means transition. Winter breaths its last dying breath and lakes and ponds begin transitioning back to their liquid states. Historical averages, predict that ice out on West Grand Lake will occur before the end of the month and anxious anglers will be practically foaming at the mouth to begin trolling for salmon and togue.

While diehards will launch their boats onto West Grand as soon as possible, personal preference, finds my family and friends invading Grand Lake Stream over the long Memorial Day weekend, about a month after the predicted ice out. This later start, certainly doesn’t guarantee good weather but the daylight lingers longer and the average temperature tends to be higher, helping to make the fishing more enjoyable. 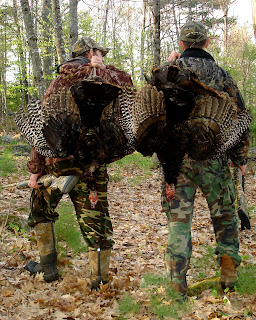 Instead of tempting fate on the waters of West Grand, I propose this is the perfect month to invest time in conducting a bit of early season prepping, for the beginning of turkey season.

Turkey Hunting
With the huge success of the reintroduction of the eastern turkey to Maine, most of the state now is able to participate in a productive spring hunting season. Though Washington County has seen an impressive increase in the number of wild turkeys over the last several years, the population still does not rival what can be expected in some of the more southern WMDs. Washington County shines, however, in light hunting pressure, with most hunters seeing very little competition throughout the course of a season. This leads sportsmen to a more enjoyable and laid back hunt and birds that respond well to calls through the spring season.

Wildlife Management Districts (WMD) 19 and 28 are both open to spring wild turkey hunting. This allows for turkey hunting throughout a majority of Washington County, excluding coastal WMD 27 which includes the communities of Calais, Machias, Lubec and Milbridge. For more specifics on the borders of 19, 28 and 27 please see the IFW website at: www.maine.gov/ifw.

By far the single most important aspect of any successful turkey hunting trip is scouting. Putting boots on the ground, thoughtfully listening for awakening early morning birds, watching their daily patterns and determining where they roost in the evening, will allow hunters an excellent chance of harvesting a trophy bird. When locating birds, practically any loud game call will work, including duck, bard owl, crow and even coyote howls. I fondly remember one morning, getting a big old tom furiously shock gobbling, to one of my favorite mallard duck calls. The only rule to scouting birds being never attempt to locate gobblers with hen calls, until you are actually hunting them. Educating turkeys to understand a predator (human) is making hen calls will only lead to problems once the season begins.

Prime turkey hunting locations exist throughout Washington County, with some locales obviously much better than others. Do not limit your hunting to large open fields, as often better hunting options exist on smaller skidder roads, snowmobile trails and power lines where the compacted areas better funnel birds into effective range. After locating that perfect hunting spot, plan to hunt on weekdays, rather than Saturdays. Hunting pressure is lighter during the week, reducing potential conflicts with other hunters. Nobody wants to go through the heart wrenching dilemma of arriving at their prime hunting location, only to find someone already parked there. Also, if possible find multiple locations in which to hunt, should your first or even second choice become compromised.

Every year it greatly surprises me the large number of people who attempt to shoot a turkey and simply miss what should have been an easy shot. This regrettable situation can typically be avoided by knowing well the operation, range and pattern produced by your shotgun. To accomplish this task safely, select a gun range or one of the many large open gravel pits that exist around the state. While Washington County contains several gravel pits where firearms enthusiasts can ply their trade, my favorite pit can be found on Route 9 (the Airline) 1.5 miles from the wilderness (Eagle Mountain) lodge, driving toward Calais at GPS coordinates N 44 54.346’ W067 51.509’.

Be sure to practice shooting from a sitting stance, as this will likely be the same position you will be in while targeting turkeys in the field. Know your effective kill zone by pacing off your intended range and examining the number of pellets that hit your intended target. When in the field pace off this identical distance and mark it with three sticks, making a half circle directly in front of you. Put your decoy about 20 paces out approximately in the center of this ½ circle and you are now prepared to critically hit any turkey that enters this defined space. 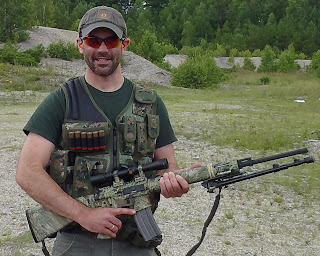 Target Shooting
While at the pit, be sure to bring along your favorite shotguns, rifles and pistols and spend a little extra time practicing your shooting skills. Hand held launchers are an inexpensive way to throw clay pigeons or if shooting alone, the spring powered foot triggered rigs, provide hours of fun. For those of us liking more bang for our buck, bring along some tannerite (www.tannerite.com). This legal exploding rifle target, adds a lot of joy to long range target shooting. Upon impact, with a high powered rifle round, a sizeable explosion occurs from these relatively diminutive targets, making it impossible to question if a target was hit, even at extended ranges.

Lastly for the close range pistol shooting, I recommend bringing along zombie targets. My favorite is the relatively inexpensive two dimensional Birchwood Casey's Darkotic Zombie targets that ooze such realism; I can almost smell the rotten flesh. For big spenders, zombieindustries.com has an impressive selection of three dimensional bleeding zombie targets and also offer their own exploding rifle targets (similar to tannerite) called “Zomboom”, as well as wide selection of life sized paper zombie targets.
Posted by Rabid Outdoorsman at 4/01/2013