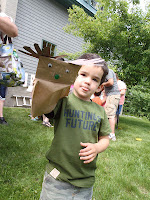 It was rather a last minute decision that was made this year, to attend the annual Moose Lottery Festival in Oquossoc, Maine. What had drawn me to this years event was the large number of “family” activities that were organized in Oquossoc as well as in the neighboring town of Rangeley.

It was apparent that these two towns certainly know the value of a tourist’s dollar and how to effectively put on a celebration that is sure to bring people back year after year. Though the Moose Lottery next year will be held in nearby Greenville,  I am already planning to head back to Oquossoc later this summer for some family camping and fishing on Mooselookmeguntic Lake. 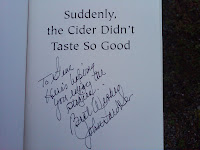 Festivities included a fantastic event at the Rangeley library were kids cold enjoy a book reading, fun games outside, moose track ice cream and a HUGE selection of raffled prizes! Both the Wildman and the Savage walked away with stuffed moose toys and were absolutely THRILLED! Throw into this mix a bouncy house and rock climbing wall and the kiddos had all they could do to hold themselves together to choke down a late afternoon hotdog from the HUGE concession stand!

For the adults, there were a ton of events as well, including the world invitational moose calling championship, a ton of vendor booths (Including that most infamous and awesome of BDN Outdoors staffers Pat Lemieux - @PatrickJLemieux of the blog Manchild), fishing derby on Rangeley lake and Mooselookmeguntic, a book signing by retired game warden and author of “Suddenly The Apple Cider Didn’t Taste So Good”, John Ford and lastly the all important Moose Lottery!

If you have never been to a Moose Lottery you simply MUST go at least once. The excitement of hearing the names being read and seeing the reactions and smiles of those drawn is truly awesome. I was lucky enough to be sitting next to my Mom’s husband Leonard Lloyd when his name and his son’s names were BOTH called to participate in this fall’s hunt! Talk about EXCITEMENT! Having already had my bucket list dream fulfilled to shoot a moose, I was content to just see all of the others thrilled at being drawn for the hunt of a lifetime!

BTW, If you were picked for a Maine Moose tag, be absolutely sure to read, How to Hunt Moose.

For those participating in next years draw just remember that reading 3,723 names is going to take a little bit over 3 HOURS! So, this is not an event a small child is going to sit completely thorough easily. Plan accordingly by having a back up plan or only attending a portion of the drawing. The most exciting part of the event was the first hour (for kiddos) after that the crowd switched from rowdy to subdued depending on the frequency at which a name was drawn of an individual or family in the audience.

So my advice, go to Greenville for next years Moose lottery, bring the kiddos and I promise you will not be disappointed! Below is one of my favorite pictures from the trip. The Wildman, the Savage and I enjoying a lazy Sunday morning fishing for perch and chubs off the motel dock. Enjoy! 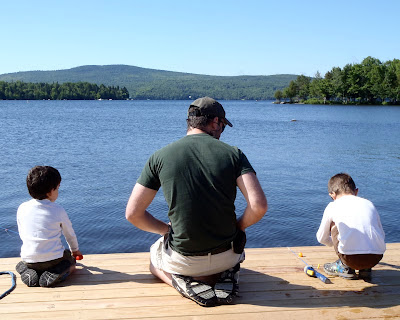