Going to the Dogs, Hounding Bear with Spaulding Lake Outfitters 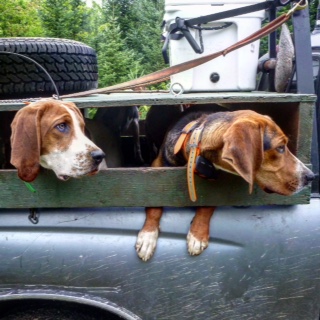 The echoing chorus of the pack, suddenly fractures the early morning silence and the chase is on. My heart rate quickens as the howls of the excited hounds reaches crescendo, indicating they are hot on the trail of a bruin. Early game camera pictures had indicated that a bear well in excess of 200 pounds had been a regular visitor to this bait site and I hoped the hounds were on his track.

As the sounds of the hounds begin to grow distant, I wander over to the guide to examine his handheld GPS dog tracking unit. A true marvel, the GPS unit is capable of tracking the movements of each individual dog, as well as indicating when a dog is sitting (resting) or has treed a bear. Given the massive size of the territory we are hunting, I cannot fathom how difficult hounding must have been before these units and their predecessors radio collar telemetry were created. How a hound man ever recovered his dogs after chasing a bear across this massively expansive country must have required a Herculean effort. Watching the hounds give chase to the bear on the small screen is addictive. The track of the hounds is overlaid on a detailed topographical map and shows the bear following streams and crawling through cedar bogs in an effort to evade the rapidly advancing hounds. 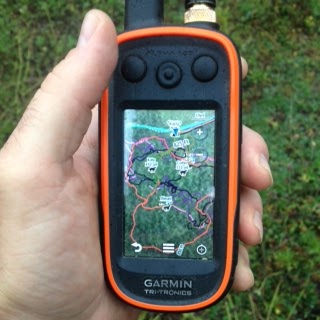 As the hounds chase the bear toward another accessible road, the guide shouts that we need to roll and in seconds we begin rocketing down the gravel backroad in an effort to cut off the bear. We arrive at the location, shut off the truck and quietly wait and watch the GPS tracker. "Bear should be on top of us any second", says the guide. My adrenaline surges as I intently watch the woods for movement. A minute passes and suddenly I see something moving through the bushes toward us at a great rate of speed. The animal erupts from the spruce thicket and instead of a bear, it's lead dog Nash. Nash blows by me without even a look, wild on the hot scent of bear. "Must have just missed him crossing", says the guide "let's catch the trailing dogs, throw them in the truck and replace them with fresh dogs". 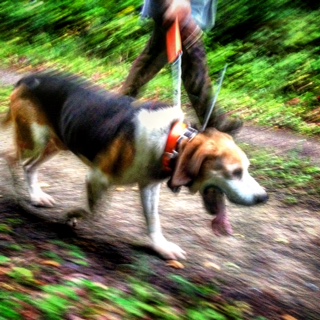 "850 yards", says the guide and I begin thinking this will be easy. As I step into the forest, however, I see that this journey is going to be anything but "easy". Tangled alder bogs, spruce thickets, blow downs and all sorts of woodland challenges stand in our way and as the temperature soars, I know this is going to be an adventure. We move slowly, methodically watching our footing and taking care to avoid mechanical injury. After about an hour, the once distant howls of the hounds have grown to high intensity. Through the thick underbrush, I can see the hounds and as we edge closer, I can see the black outline of a large bear about 35 feet up a large pine tree.

The massive bear, to my surprise, appears comfortable and almost relaxed sitting on his high perch, seemingly unconcerned at the commotion occurring at the base of the tree. As we nudged closer, the guide warns that despite the bears lasai fair attitude, I should not be lulled into complacency. A bear's actions can be erratic and a treed animal can rapidly develop a change of temperament the moment it begins to feel threatened. 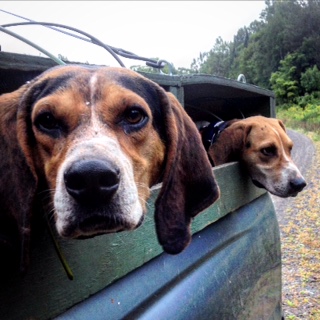 I slowly pull up my weapon of choice for this expedition, a small video camera, and begin recording the event. It's exciting, fascinating really to be this close to a black bear if this size. While I enjoy hunting bears with a firearm, this day we are not hunting, instead we are training dogs for the upcoming bear hounding season. Even absent of a fatal end for Mr. Bear, I am relishing the opportunity to be involved in this spectacle. The guide asks me to stand back and one at a time he begins pulling the excited hounds off the base of the tree, tethering each in turn to a nearby tree. As the guide starts to pull the last dog, he warns that the bear will likely descend rapidly, seeing his chance to escape. I back up a few additional yards and while I keep video taping with my left hand, my right hand instinctively drops to rest on the grip of my .357 Magnum.

As soon as the guide pulls the last dog, the bear slides down the tree and rockets into the underbrush faster than a person can blink. The bears movement is so unnaturally fast, that it makes you realize how quickly this situation could go bad, if not for the experience of a professional hounds man, his aggressive hounds and a little luck. As the bear races off, the hounds again go crazy, wanting, no needing to do that one amazing thing they were bred to do, give chase. 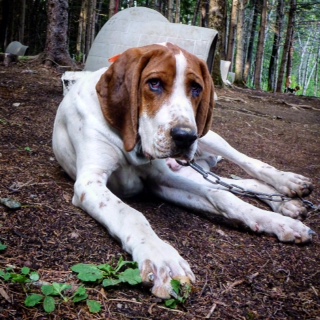 I think that no matter how you feel about hunting, everyone should at least participate this event at least once in their lives. Special thanks to Jeff Fey of Spaulding Lake Outfitters for allowing me to join hums and his rambunctious hounds on an adrenaline packed morning in Maine's wild lands. If interested in joining Spaulding Lake Outfitters for the 2016 season to run bears with hounds or hunt bears with hounds or over bait, be sure to give Jeff Fey a call!
Posted by Rabid Outdoorsman at 11/23/2015