Pick Up Bow Hunting and “Expand” the Possibilities 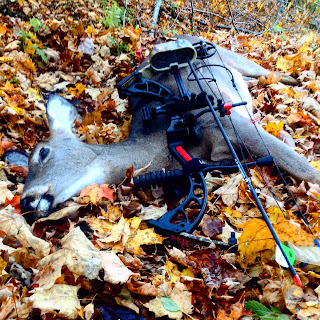 Bow hunting has the exciting ability to open up a world of new possibilities for Maine hunters. Unlike firearms, the bow and arrow appear too many in our society to be a more “environmentally friendly” or “green” method of harvesting game animals. This is likely because compared to their modern day cousin the firearm; bows are quiet, arrows incapable of traveling great distances and the pursuit of game with the bow and arrow a sport romanticized on TV and in modern day movies. This perception allows archery to be more readily accepted by residents in urban areas, where the general population would otherwise normally disallow hunting with firearms.

The state’s expanded archery zones were established to provide deer hunting opportunities in urban areas without negatively impacting or human safety. Most of these small parcels of land are residential developments interspersed with small woodlots and existing within city and town limits, areas unable to be hunted with firearms due to municipal ordinances.

Within these zones, a vast majority of the acreage is privately owned, almost exclusively requiring landowner permission to hunt. In addition, large sections of additional acreage is unhuntable due to sanctuaries, local ordinances or because individual landowners do not support hunting and/or trespass on their land. While this creates an added burden to archers attempting to find areas to hunt, let me stress that it is well worth the additional effort. This past hunting season, I saw no fewer than 7 deer, within the bounds of the expanded area I was hunting, including 4 does, two 6 pointers and a massive 12, that total equates to more deer than I have seen in the Maine woods in the previous 4 seasons combined! While I was unsuccessful in harvesting one of the massive brutes, I encountered, I did manage to harvest a 110lb doe, my first with the bow and arrow.

The excitement of bow hunting, along with the added thrill of being able to see so many deer has me hooked on hunting the expanded archery zones. While these areas do require considerable planning to hunt successfully, this season I was able to learn a few key elements that tip the odds in the sportsman’s favor, when hunting these zones. It should be no surprise that pre-season scouting is essential. To accomplish this successfully, good aerial maps supplemented with tax maps of the area and a GPS are essential. In the expanded zones, it is important to not only know where you are but also upon whose property. Having both maps readily accessible makes it easier to find huntable areas and immediately follow up by phoning and asking the owner for permission to access. Without a tax map, hunters will encounter a lot of signs stating, “Access by Permission Only” but with no indication on the sign who to call for permission. Once a suitable hunting location and permission is secured, get in early to scout, find an ambush location and get out. With hunting in these zones starting in September, hunters should know the property and have stands in place by July. While a majority of these properties are small and in close proximity to human habitation, the deer can still be easily spooked if their core area suddenly receives a human invader.

Expanded zones located in close proximity to areas allowing hunting with firearms can often be safe havens for deer during the November regular statewide firearms season. Hunting the expanded zone throughout October and November, I noted a spike in deer activity and the number of deer seen during this time. While some of this increase in sightings can likely be contributed to the rut, I feel that some of the increase is also due to the much lower hunting pressure that exists in the expanded archery zones. In addition, to what I learned about he expanded archery zones previous hunting season; I also learned a ton about what it take to be a successful bow hunter.

After several years of practicing with the bow and arrow, this past hunting season, I felt I finally had the confidence and skill needed to shoot my first deer with the bow. While I had the “mechanics” of shooting a bow down, what I realized is even more critical, to being a successful bow hunter, is being able to negotiate all of the unforeseen elements that occur when shooting a bow. One of the most difficult things for me to overcome was shooting with a face mask. After the first week of fighting with the masks Velcro straps, feelings of claustrophobia and eye holes that never seemed to actually fit over my eyes, I finally gave up and began using camouflage face paint. This small change changed my entire bow hunting game and I will NEVER use a facemask for deer, turkeys of ducks ever again. I had thought that the paint would be messy and hard to remove but by carrying a few baby wipes in a Ziploc bag, I was amazed at how easy it was to clean up after hunting. The second important consideration for me this season was related to overall comfort. Knowing that I would likely be spending large amounts of time high in the treetops, I invested before the season started in two pieces of new equipment that transformed my comfort. The first piece of equipment was insulated, waterproof bibs that made long sits extremely comfortable. With the extra cold protection on my legs and lower back, my feet were considerably warmer and I was even able to still wear them on even the mildest of days if paired with a lightweight jacket. The second piece of equipment was a three-section articulating bow hanger by Realtree. This simple device screws into the side of the tree and a swing arm bring the bow to any forward or side position the archer chooses. This take the bow out of ones lap and hangs it readily within reach, making it available to grasp when required, with little movement. Having the bow hanging facilitates stretching, taking a drink or relieving yourself without the worry of dropping ones bow, thereby greatly increasing the ability to be more comfortable.
Posted by Rabid Outdoorsman at 5/16/2016