The inteliSCOPE Pro+ Transforms Hunting for Young and Old Alike 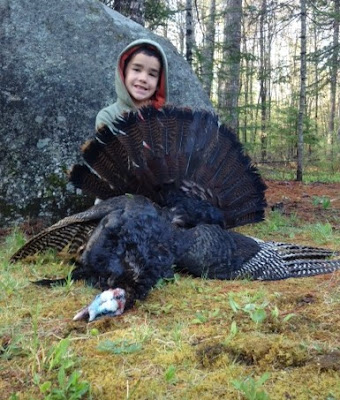 The spring 2016 turkey hunt was an exciting time for my sons and I as it was the first time we were all able to hunt together in the Maine woods. A change in the previous hunting laws, that became effective on January 1, 2016, eliminated the provision that a child needed to be 10 years old before they were allowed to hunt. Now, the current law permits a child of any age to hunt, as long as they are in immediate proximity to an adult. For my family, this means that my 7 and 9 year olds were able to both join me on the spring turkey hunt!

Preparations for the hunt started when both boys were just 5 years old, as this was the age that they both began shooting BB guns. Both children progressed to learn to safely shoot pellet guns, the .22 rifle, the .410 shotgun and as we moved closer to turkey season the 20 gauge shotgun. In accordance with Maine law, the 20 gauge is the lowest gauge allowed to hunt turkeys. As we progressed through our shooting practice, I noted that the 9 year old easily managed the recoil of the 20 gauge and was able to look down the barrel and correctly acquire the sight picture necessary to hit the turkey target at 30 yards. Unfortunately, as the spring turkey season crept ever closer, the 7 year old was just not understanding what he needed for a sight picture and even worse, was beginning to develop the bad habit of flinching at the recoil of the 20 gauge. Even at 15 yards, he was not consistently hitting the turkey target. Understanding these problems, I began researching other means of helping him successfully shoot his turkey. This is when I found the inteliSCOPE Pro+. 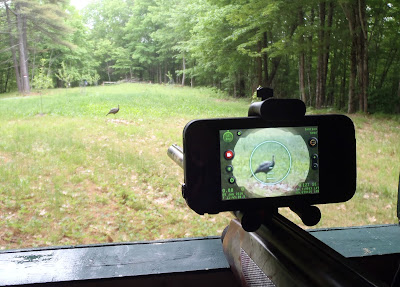 The inteliSCOPE Pro+ (http://inteliscopes.com) is an extremely innovative product that allows the Smartphone we all tend to carry to be used as a weapon sight. This is accomplished by the use of the inteliSCOPE Pro+ mounting system that firmly attaches to a picante rail of an AR15 OR (with a little finagling), to the rib of a shotgun. To the mount is securely fastened the users Smartphone (Android or iPhone). By downloading the company’s intelliSCOPE App, users are able to simply load up the apps crosshairs on the Smartphone’s screen, line up targets and pull the trigger. Now if that was ALL the entire app did that would still be great for most practical applications but it does so much more.

The intelliSCOPE app ties into your Smartphone location services making it able to provide real time wind speed, direction and GPS location. The app also allows the user to record video (perfects of hunters wanting to record their kill!), zooms up to 5x, the ability to change reticules and an adjustable sighting system that provides pinpoint accuracy at various ranges and calibers.

For the 7 year old and I, that meant we could sit together in the turkey blind and I could assist him in lining up his target. The large Smartphone screen, made it possible for both of us to effectively see the turkey in the crosshairs, allowing for an ethical shot. Additionally, because his cheek did not have to be firmly planted on the shotguns stock, to look down the barrel, he was able to fire the gun with less felt recoil.

Off and on through the months leading up to the spring turkey season opener, the 7 year old and I practiced with the intelliSCOPE system until I felt confident that he could manage his excitement and hit his target. Well, as they say, practice makes perfect and just one week into the season, a large Tom turkey strolled into his shooting lane . . . the boy took a deep breath, stared intently into the intelliSCOPE and pulled the trigger. Excited can not properly express how wildly thrilled the 7 year old was at that that moment when that old bird dropped dead to the ground with a single lethal shot. Many thanks to intelliSCOPE, who in the design and development of their impressive sighting system, likely never dreamed that it would someday be used to help a young boy shoot his first turkey, thereby forever adding him and his unforgettable experience to the tradition of hunting.

MORE INFORMATION: In an email discussion with intelliSCOPE President/CEO Jason Giddings, Jason mentioned that the intelliSCOPE system is currently being used to help folks with various disabilities continue to hunt. Individuals with visual impairments, loss of limbs, paralasis, etc. can mount the intelliSCOPE to their rifles or shotguns and control the aim with a chin-joystick, pulling the trigger by puffing a straw. This is an amazing gift for those individuals who wish to overcome their constraints and continue to chase their hunting dreams despite their physical disabilities.
Posted by Rabid Outdoorsman at 6/06/2016