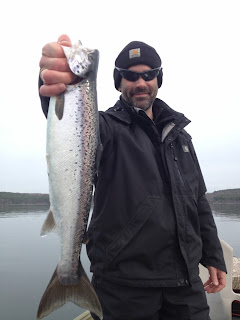 Lead is Dead
Last season, I started trolling togue with wire trolling line. Wire lining might not be the sportiest way to catch togue but it is highly effective and given my extremely high degree of success with this product, I am afraid I will never again be able to return to using lead core line again.
Tolling with wire line, such as AFW’s Monel trolling wire, allows anglers to get down deeper, faster and without having to let out as much line as those fishing lead core. This is made possible because wire line has a higher mass and lower diameter than lead core line. This property, of wire line, allows it to sink more rapidly than lead core and attain deeper trolling depths without the use of additional sinkers or down rigging. As a comparison, running 100 yards of 30 pound test Monel, at trolling speeds of less than 2mph, provides the ability to fish depths of almost 70 feet. The same length of lead core trolled at the same speed, will sink only to a depth of approximately 50 feet. Wire line also displaces a smaller volume of water than lead core, thereby creating less felt drag. This translates to less felt rod vibration, leading to decreased angler fatigue after a long day of trolling.
Wire line does require anglers to learn a few new knots and some fishermen may even need to purchase a new rod and reel. I prefer a medium fast rod that has the backbone to handle the heavy load of line, weight, spoons and lure but also still has some degree of action at the tip for playing out caught fish.  Those who fish a lot will likely place a lot of stress on their equipment and wire line. To help combat these issues, be sure to check out the “Twili-tip”, this invention uses a small spring to guide the wire line through the rod tip, saving rod eye wear and reducing line kinking which can ultimately weaken the line. I run my wire line through a mooching reel but other choices are equally good as long as the spool isn’t made of plastic. Wire will eventually cut into plastic spools, rendering the reel useless. Mooching reels are nice because an angler can slowly play our line by cranking the reel handle. Using a standard trolling reel, an angler must slowly thumb the wire of the spool otherwise it “birds nest”. Wire line is unforgiving and hurrying it off your reel will have you using the cutting out the snags with pliers. Ultimately, however, even with these few challenges, the positives of using wire line are well worth the initial investment of time and money.
By carefully watching the depth finder and spooling line in and out carefully and deliberately anglers can hug the bottom and find where the big boys hide. Don’t be afraid to snag bottom from time to time, just make sure that the drag on your reel is set lightly. Wire doesn’t stretch and catching bottom can quickly become problematic. Last spring while trolling for togue on Whitney cove on West Grand Lake our largest togue were hooked seconds after our deep water trolling rigs bounced off bottom. It is my guess that the disturbance of the substrate elicits togue to bite.
Big Bait Big Fish
When targeting big togue with deep wire lines, I prefer to use big bait. When trolling, live bait isn’t needed so my favorite baits include; sea run smelts, large golden shiners and suckers. Sea run smelts caught during the winter while jigging out of the smelt fishing shacks on the Kennebec river can be bagged, frozen whole and used effectively as bait all summer long, same with large golden shiners left unused after ice fishing season. For those looking for additional togue bait should consider checking out, 42 acre in Talmage  as it is a great spot to catch white suckers.
Catching suckers isn’t much different than catching smaller baitfish like minnows. The only difference is that the hole in the bait trap needs to be slightly enlarged and white bread is used primarily as bait. Successful sucker fishermen also know to target the mouths of inlets and outlets to maximize catches. Also, in , the White Sucker spawns, usually in great numbers, in the shallow water of streams throughout April and May and can be easily netted.
Posted by Rabid Outdoorsman at 5/03/2017