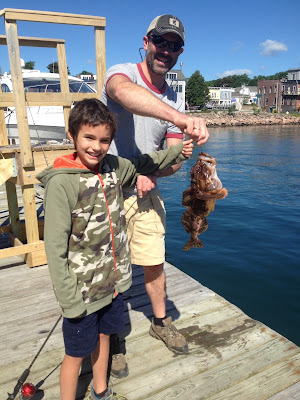 Fishing for Sculpin
Fishing off the commercial pier in Eastport (Delorme’s The Maine Atlas and Gazetteer (MAG), Map 27 A-4) has always ranked as one of my fondest childhood memories. We used to catch a lot of mackerel back then but I don’t recall ever keeping any of the fish; instead we likely threw them back into the or gave them to one of the many other anglers fishing the pier. In those days, the fishing was always furious and a young boy had all the mackerel he could dream of catching by just lobbing a single weighted hook into the large schools. I remember the schools being so massive, that anglers could watch the mackerel whip the water frothy as they chased baitfish around the entire harbor. While the fishing these days certainly isn’t as good as it once was, fishing off the Eastport pier still has all the makings of a fun adventure for young and old alike.
This past July, I had the pleasure of taking my two young sons angling for the first time off the pier in Eastport. Unfortunately, luck was not on our side and over the course of several hours, we never managed to land even a single mackerel. My understanding, from talking to several locals, was that we were a few weeks early and the schools of tinker mackerel had not yet reached this section of the coast. While the mackerel didn’t corporate, what we did manage to have fun catching were several sizeable sculpin.
Within the there exist several different fish that are members of the sculpin family. Included in this list are the Hook-eared sculpin, Mailed sculpin, Shorthorn sculpin, Longhorn sculpin, Stag horn sculpin and Arctic sculpin. Of the species listed, the Longhorn sculpin is the most plentiful and the fish most frequently caught off piers. While not a massive fish, the Longhorn sculpin can grow to 18 inches in length, although few of them ever get any longer than 10 to 14 inches. 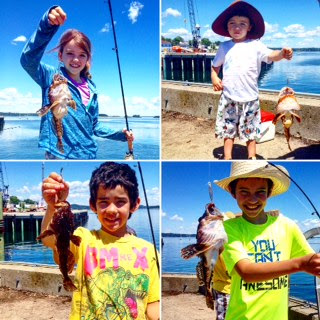 Not a fish that will ever win a beauty pageant, the homely sculpin has been known to elicit screams of fright from unsuspecting anglers who haul one out of the brine. Oddly proportioned with a head and mouth seemingly too small for its body, strangely colored and possessing spines that jut out from its head and fins, the sculpin is truly an ugly looking fish. In its defense, however, the lowly sculpin has evolved over the millennium to become a master of camouflage, possessing the ability to vary its skin color to match its surroundings. Additionally, those predators unlucky enough to attempt to attack or eat a sculpin will quickly be dissuaded as they are covered with numerous needle sharp spines. Because of these impressive defenses, once caught by anglers, sculpin are bothersome to unhook. The easiest way to remove the hook and return the fish to the water without getting stuck is to subdue the fish by firmly grasping it by the mouth. Never attempt to kick a sculpin off the pier and back into the water as their spines can easily penetrate the thin fabric of a sneaker.
Sculpin have a voracious appetite, readily taking any type of bait or lure that is presented. What type of lure doesn’t seem all that important as they will strike about anything dangled in from of their gaping mouths. Adding a small morsel of clam, squid or fish belly helps to encourage a strike but anglers can still enjoy a high degree of success by simply jigging a lure close to bottom. Fishermen who specifically target sculpin do so using dropper rigs. These simple set-ups consist of taking 4 feet of 20 lb monofilament line and attaching a 4 oz weight to the end. Twelve inches up from the weight tie on a 2/0 hook using a dropper knot, go up another twelve inches and tie on a second 2/0 hook again using a dropper knot. At the end of the line, opposite the weight, attach a barrel swivel. Instead of using bare hooks, some anglers prefer to attach small bucktail flies to the dropper knots as these have the benefit of still eliciting strikes even if the bait falls off or is stolen. So greedy were the sculpin inhabiting the waters around the Eastport pier that I am confident the kids caught several of the same sculpins multiple times and would have continued to catch these fish over and over had we not moved further down the pier.


In , the longhorn sculpin is considered a “trash fish”. In the past, they were processed into fishmeal, dog food or used to bait lobster traps. Sculpin is, however, an extremely tasty fish to eat. The one caution to preparing this fish for the dinner table is to use great care when filleting it to avoid getting stuck by one of its many spines. The easiest way to avoid being stuck is to simply cut off all of the spines with a pair of pliers and filet like any other normal fish. The delicious flesh can then be battered and deep fat fried or simply pan fried in a drizzle of olive oil.
Posted by Rabid Outdoorsman at 7/16/2017