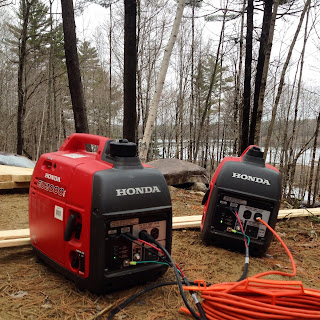 If there is one thing that the wind storm of October 29th, 2017 taught me, it’s the importance of having a generator to run critical appliances during an extended power outage. If not for a friend allowing me to borrow his generator, 7 days without power would have caused all of the food in my freezer to spoil.

Determined never to be caught in such an awkward situation again, I recently purchased a generator of my own. Purchasing a generator was not a task I took lightly and my final selection was done after completing considerable research on several of the most popular generators on the market. The first thing anyone will notice when selecting a generator is that there are a vast number of makes and models available. Finding the perfect fit is accomplished by determining a balance between, price, weight, wattage, decibel (db) rating and fuel type.

Determining Power Needs
There is no question that a generator is practical during a power outage but aside from that, generators are also valuable for providing power while tailgating, at “off-grid” cabins, when RV camping or running and charging tools at construction sites. For me, I needed a generator that would provide emergency power at my home and when not needed at home, provide electrical power for a small “off-grid” cabin. Generally, higher wattage generators cost more, are heavier and consume more fuel. For these reasons, it’s important when selecting a generator to first determine how much power (wattage) is need. To answer this question, determine what electronic devices you plan to simultaneously run as well as the wattage of the largest appliance requiring power. Most electrical devices require more power to start than they do to run, so be sure to look at an appliances start-up wattage as well as its running wattage. For my situation, I only needed enough power to run a couple lights (180w), charge my cell phone (25w) and run a refrigerator (700w), coffee maker (1000w), microwave (1000w) and a selection of power tools during construction projects, circular saw (1400w) and table saw (2000w). Since it would never be necessary to run all of these appliances and tools in unison, I calculated that a 2000 watt generator would likely provide me with all of the power needed. The Internet contains charts listing the power requirements of hundreds of different appliances so when determining exact power needs be sure to conduct a Google search for “wattage calculator”.

Fuel Choices
Generators run on a variety of different fuels including, natural gas, propane, diesel, regular gasoline, mixed gasoline and even solar. To simplify the available choices, two fuels stand out as the most viable options, propane and regular gasoline. Deciding on one or both of these fuels (some generators can run on both propane and gasoline) is really up to the individual. Dual fuel generators cost more, single fuel generators cost less. Also, how often will the generator be in operation, once a year or practically all the time? Gasoline has a shorter shelf life than propane and if planning to pull out a generator 1-2 times a year for emergency power, a consumer could potentially want a propane model. For me, running a generator practically all of the time, for a variety of different purposes, regular gasoline seemed the best option both for its widespread availability and ease of use.

Finding a Balance
Now with an understanding of my anticipated power needs, I then began looking at the next two critical factors, weight and decibel rating. Since my generator was going to be transported between home and camp, it was important to select a model I could easily load and unload from my truck. Also, because the generator was going to be used at my cabin, I really wanted a model that was quiet, thus maintaining the serenity of the locale.

Making a Final Selection
After compiling all of the information, I began searching the Internet for a generator that would fit all of my anticipated needs. After looking at several different brands, I finally settled on four of the mostly highly reviewed and consumer recommended models. On this list were the Honda EU2000, $899, 59 db, 51 lbs, Champion 2800, $899, 58 db, 95lbs, Yamaha EF2000isv2, $989, 51.5 db, 44.1lbs and Generac GP2200, $599, 60 db, 46.6 lbs. Given how close all of the generators were in what they were able to provide and the similarities in costs, my final decision was made by eliminating the Champion model because of weight, eliminating the Yamaha model due to price and eliminating the Generac model because it received a lower consumer recommendation than the Honda.

As such, my final decision on a generator was the Honda EU2000, a machine possessing the perfect mix of all of the key ingredients and power I needed. An important additional item is that if not concerned about a generators weight and decibel rating, a considerable amount of money can be saved. For example the Champion 3650 is a loud 68 db and heavy at 98lbs but provides well over 3500 watts at a bargain price of $319.

Cautions and Dangers
Generators are NEVER to be operated inside an enclosed area, as they emit carbon monoxide that can kill people and pets in minutes. Care should even be taken not to run a generator in close proximity to an open door or window, as dangerous fumes can still enter interior spaces. Generator can safely provide power by either using extension chord(s) to provide power to a homes electronics or by hard wiring directly into a homes fuse box. Portable “emergency” generators (2000w and lower) tend to be used by a majority of homeowners using extension chords. Larger generators (2000w and greater) tend to be hard wired, as this is a safer and more convenient model. Homeowners wishing to hardwire their generator should have the installation completed by a certified electrician and thoroughly understand how the generator is connected to the house’s electrical system and the power grid.
Posted by Rabid Outdoorsman at 1/18/2018