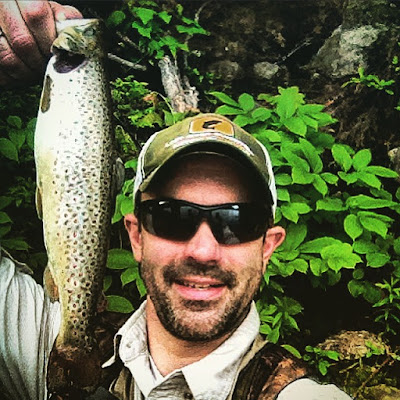 Historically Speaking
Resilient and possessing an innate ability to survive in adverse conditions, the Brown Trout thrives in “marginal” waters that would likely kill other trout species. Because of this, Brown Trout will likely become the future of sport fishing in Central Maine. Since 2003, the Department of Inland Fisheries and Wildlife has been studying three different strains of Brown Trout brood stock, in an effort to determine which is best to use to stock Maine waters. The study, set to conclude in 2020, will ultimately determine which of the three Brown Trout will be most successful in competing for survival in waters currently home to many aggressive fish species.

The Department of Inland Fisheries and Wildlife, “Brown Trout Management Plan” states that, “Brown trout are a well-accepted part of Maine’s fisheries management program. Their attractiveness as a sport fish and their ability to adapt to a wide range of habitats has made them invaluable in providing a sport fishery in many lakes, ponds and streams which otherwise would have none.” Inland Fisheries and Wildlife has obviously put a lot of effort into determining how the Brown Trout best fits into the Maine biome and should be commended. Brown Trout aren’t native to Maine, but they are still a challenging fish worthy of catching.

Catching the Big Bad Brown
Difficult to catch and reclusive, big brown trout over 20 plus inches are on just about every angler’s wish list. These fish don’t get huge however by being stupid, so fishermen looking to catch one need to employ tactics designed to specifically target these behemoths. Browns can be caught during all times of the day but the biggest browns only move out in search of food in low light conditions and that means if you want to catch the big boys, you are going to have to fish before dawn or after sunset. Scientists, studying the feeding behaviors of big brown trout, have conducted tagging studies that show these fish rarely move from their protective hideouts in daylight but travel miles in search of food at night. Once a brown trout reaches a size in excess of 20 inches, they become primarily fish eaters, because of this, flies like the Cone Head Slumpbuster Bunny Streamer or the Clouser minnow both in black, catch big browns regularly. To increase the effectiveness of both of these lures, add a small red bead to the line ahead of the fly. Upon retrieval, the bead taps against the head of the fly creating underwater vibrations that goad fish into striking. For the spin casting angler, lures like the black ¼ ounce Arbogast Jitterbug and other top water lures like the black Savage Gear Rad Rat drive large carnivorous browns crazy.

The world record for brown trout is 42 pounds, 1 ounce, while the state of Maine record is a 23 pounds, 5 ounces fish caught on Square Pond by set by Robert Hodsdon in 1996.

Black Best
Some readers may wonder why “black” lures are used for night time fishing. This is because fish see contrast very well and black lures cast a very strong silhouette. Because most fish attack a lure from below, the dark color stands out against the night sky like a sore thumb compared to lighter colored lures that can actually be quite difficult for fish to see on moonlit nights. A final trick to catching big browns is avoiding the crowds. Pressure will force big browns into hiding so anglers must fish when waters are most quiet. Fishing isolated waters, mid week and at night practically ensures a fisherman will likely have prime fishing spots all to themselves.

Spectacular Spectacle
A conversation with one of the central Maine wildlife biologists yielded information that 139-acre Spectacle Pond (DeLorme’s The Maine Atlas and Gazetteer (MAG), Map 13, 1-B) in Augusta and Vassalboro has been regularly producing big browns through the ice all winter. This success is likely because of the strict regulations and limited boat access (hand carry only and motorboats over 10 horsepower are prohibited). Anglers targeting browns must be aware of the S-6 (Artificial lure only) and daily bag limit on brown trout is set at 1 fish, with a minimum length limit on brown trout at 18 inches. If anglers plan to also target the ponds brook trout, be aware of the ponds S-16 code that states that the daily bag limit on brook trout is set at 2 fish, with a minimum length limit of 12 inches and that only 1 may exceed 14 inches. Other S-code restrictions exist during October-December and anglers are encouraged to read the law book before fishing Spectacle Pond. Pond Access Spectacle Pond is surrounded by the Alonzo Garcelon Wildlife Management Area and private landowners. If driving to the pond from route 3, the access road is 3.8 miles from the intersection of Church Hill Road and route 3. A large sign marks the access road to the pond which is via a gravel road which extends approximately one and a half miles through the woods starting at Church Hill Road and ending at a parking area next to the pond. Only hand-carried craft can be put in the water from this location. Spring access to Spectacle is iffy, with the road entering the pond typically gated until after Memorial Day (May 28th). Individuals looking to get a jump on the crowds can park alongside the road and walk in. Float tubes allow anglers to successfully target browns across the entire western shore of the pond.
Posted by Rabid Outdoorsman at 4/03/2018