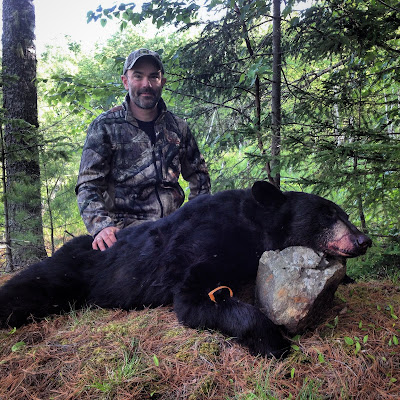 September arrives, bringing with it a marked decrease in the number of biting insects, a slight nip to the evening air and dramatic color changes in local foliage. It is also this time of year when hunters begin to develop that wild and crazy look in their eye, as the excitement of the impending arrival of hunting season builds to a crescendo.

One of the events I will be partaking in this hunting season is the pursuit of black bears in Central Maine! Yes, that is right folks, multiple black bear sightings have been made in the state capitol right here in Augusta. Several bears have even been sighted just a few miles from my house. While some might not like the idea of a large predator roaming around in their backyard, for me this is exciting news!


Bear Hunting
Bear hunting provides an adrenaline pumping adventure, guaranteed to raise goose bumps on even the steadiest and most reserved outdoors people. A primal urge exists deep within the primitive mind that signals an instinct to run when an immense meat eating animal lumbers out of the woods, suddenly and mere yards from a hunters shooting position. Few other creatures appear quite so mighty and powerful as a truly massive black bear and even professional hunters feel their hearts beat heavy just at the sight of these bruins. If you have never tried bear hunting, I strongly suggest giving it a try!

While black bear are primarily hunted in Maine over bait or by using dogs another method of hunting them, quickly growing in popularity, includes using predator calls. Hunters can hunt bears during the general season from August 27 through till November 24th.

Calling bears offers a different type of hunt and it can be extremely difficult to trick them into shooting distance. Unlike calling other predators like the finicky fox and the caution coyote, calling bears requires either a lot of lung power or an electronic calling device. Bruins have extremely short attention spans and when the calling stops, so will the approaching bear. Screaming rabbit, is a popular Maine choice but hunters will need to practice an extreme level of patience and maintain continuous calling sequence lasting for an hour or more before they can expect a bear to lumber into shooting range.

When choosing a location to set-up your calling sequence, a number of factors must be considered. Sites should preferably be in thick wooded spots beside swamps or near small streams where food and water is readily available. Hot September days can often find big bears hiding out in these damp areas as a way of staying cool in the full heat of the day. Swamps closely bordering beechnut-laden ridges are prime black bear habitat. Extensive scouting for sign and the use of game cameras will greatly help hunter’s pinpoint prime areas and maximize their time spent calling. Determining the predominant wind direction and placing stands or ground blinds directly downwind or crosswind from the expected direction of approach will increase the chance of fooling the sensitive noses of these bruins. Hunters should still always be cautious; as a bear coming in to what it believes is lunch is often anything but predictable.


Fall Turkey
Hunting bears not quite to your liking? Well fortunately, the fall wild turkey hunting season is open in WMA’s 15-17, 20-25 and 28 October 1 through November 7. Typically fall hunters still have the “spring” mindset that they can only shoot a gobbler but fall hunters can also harvest hens and poults. Shooting a hen is no more wrong than shooting a doe deer, and after eating a tender hen or poult deliciously slow cooked in a crock-pot, hunters may never want to eat a gobbler again. Hunters chasing turkeys in the fall need to modify their tactics, compared to what they employed during the spring season. Unlike the spring hunt, fall turkeys are a completely different animal.

One of my favorite fall turkey hunting tactics involves spot and stalk on single birds. Using binoculars, I locate a solo bird and work to intercept its path. Having a decoy and employing soft clucks and purrs helps to nudge the bird toward you if it starts to wander off track. With luck, the bird will continue on its trajectory and walk directly in the path of your awaiting gun barrel. Another favorite technique is patterning flocks and simply setting up between the roost and their food supply.

Game cameras can be extremely effective tools to help pattern turkeys. By showing exactly where and when birds are walking through or visiting a particular area hunters can use this information to be precisely where the birds are, thereby maximizing hunter time and energy afield.
Posted by Rabid Outdoorsman at 9/05/2018