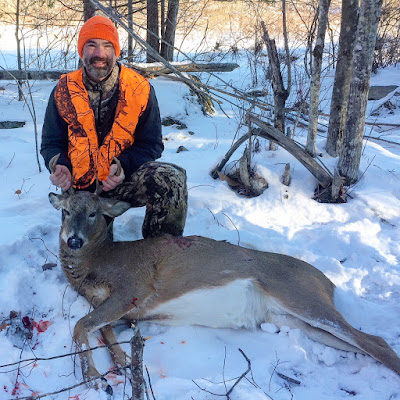 By the time November arrives, a hunter’s dreams have turned to the pursuit of large bodied deer, to assist hunters in achieving the goal of harvesting one of these impressive animals, I am going to share the surprising number one secret to successful deer hunting, mental preparation. A positive attitude is infinitely more important to an outdoorsman than scent blocker clothing, a high end ATV or the latest fad in ballistics. Success in the field is about the ability to remain positive despite the weather, moon phase or week of the rut.  A motivated individual will hunt longer, harder and through more adverse conditions then someone who is unprepared mentally to go the distance. Hunters that truly believe “this is going to be the day”, are much more likely to be in the woods during that critical time.
Most individuals are prone to invoke certain skills that allow them to sharpen their mental focus and attitude. For example, taking a deep breath to settle ones shooting hand, counting footfalls while climbing a steep incline or even pinching one’s self to keep from falling asleep. I even have a friend, who had been on a seven year losing streak and claims his success last deer season was due to the purchase of a rabbit’s foot! Obviously, rabbit feet have little direct connection with success in the field; however, their indirect effect is that they instill confidence, a characteristic key to filing a tag.

Pre-Season Scouting
This may seem like a no brainer but to shoot deer a hunter must first determine where the deer are located. A favorite tree stand may be located in a beautiful spot with a lakeside view and long shooting lanes but if there is no deer signs (rubs, scrapes, tracks or droppings) then an entire season could go by without a single deer being seen.

To increase the chances of putting a whitetail in the crosshairs, start walking. Absolutely no replacement can be made to thoroughly and personally scouting an intended hunting area. Maine’s subtle terrain features and the obvious physical signs of deer can only be effectively understood through intimate firsthand knowledge. Pay close attention to the minute details, bring a notebook and write down GPS coordinates, prevalent wind direction, food sources, game trails, sign and location of sheltered bedding areas. Use this information to devise a plan as to where to set-up stands or still hunt.

Deer hunting is Central Maine is becoming a greater and greater challenge as more and more landowners restrict access to their land.

Scent Control
Highly technical clothing creates the illusion to some hunters that they can pull off miracles in body odor elimination by simply putting on scent blocking apparel, using an Ozonics generator or covering their bodies in no-scent spray. While these products certainly provide some small level of scent control, hunters can further increases their chances of success by following a few additional suggestions.

A more traditional approach in scent control, relies on practicing impeccable personal hygiene and using wind direction to gain the advantage. I advocate the use of this approach at deer camp only to find that my lamentations fall short on the ears of individuals dressed head to toe in scent blocker and chain smoking cigarettes. To be more effective this season, plan to implement using a pee bottle and no scent detergent, shampoo and deodorant.  No scent hygiene products are available at the local drug store (for individuals with fragrance allergies) and are typically cheaper than at a sporting goods store. Wash hunting clothes frequently (not once a season) and seal in a plastic bag with a few spruce boughs to lessen the chance for cross contamination with smells that may be lingering in the basement. If driving to a hunting location, dress in hunting clothes and boots upon arrival, as this will avoid the possibility of picking up odors from the car, gas station or local convenience store.

Packing for Success
Finalize mental preparations by believing one hundred percent that success will occur.  To enforce this belief, include a gutting kit (deer tag, pen, sharp knife, drag rope, florescent orange marking ribbon, dish washing gloves, paper towels and a 1 gallon Ziplock bag for the heart and liver) in your backpack to make it easier to field dress and bring that trophy to the tagging station.

Electronic Calls and Deer Decoys
I remember the first time I showed my “traditional” deer hunting family members my buck call and bottle of deer urine, they practically fell over backward laughing. Several dead deer later, their laughter had stopped and they all become converts, began using the same products and consistently started shooting more deer. I was met with this same comical reaction when I began using a remotely controlled electronic deer call and a doe deer decoy to attract bucks.

Despite the mockery, let me offer an assurance that these two products (in the right situations) bring the deer running. They work because hunters create a distinct advantage when they set-up an electronic call and a decoy along a field edge several 100 yards upwind or cross wind from their positions. The decoys create confidence by showing deer that it is safe to be out in the field feeding, tempting others to follow and emerge from their hiding places before the end of legal shooting. The remote call has deer honing in on an upwind location, allowing less of a chance that their keen noses will detect human scent. Also, for those not entirely proficient on all of the various deer vocalizations, the electronic calls allow novice hunters a chance to call deer like champions and truly “speak” the whitetail language.

With electronic calls one truly gets what is paid, so make sure to invest at least $200 or more when purchasing one of these units. My personal favorite electronic calls are those made by FoxPro but many other quality calls exist on the market.