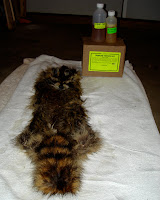 As a young boy, tanning hides was something the elders of the clan did to us children when we were misbehaving. It usually occurred in the woodshed with a leather belt, random piece of kindling wood or some other close at hand justifiable implement. The entire procedure only took a few minutes and in the “end” always managed to produce a beautifully tanned hide. With the advent of time and perhaps what some would call “advancements” in child rearing, the old methods of tanning hides no longer seems to be an accepted parenting practice. Not to be confused with the barbaric methods of old, I recently decided to try my hand at tanning hides. Perhaps from my previous experiences with getting my hide tanned, I assumed that the process would be rather easy to accomplish, straightforward and quick to complete. I was however wrong.

Of course to begin any tanning process, you must begin with a hide. In order to secure a hide you must first kill an acceptable furbearing critter. Personally, I chose to target fox and coyote because I trapped them as a child. Back then, I sold what I caught and thus was unable to keep any of my original hides. Of course, best made plans never seem to work out quite the way you originally wanted and thus I ended up completing the 2009 trapping season with a single raccoon hide.

Having had much experience with the skinning process from many year of previous practice, I was able to easily separate the masked bandit from his fur coat. For the uninitiated, this is a relatively simple process with the most difficulty occurring around the tail and head. The tail skin can be rolled off the tail bone using a couple of pencils placed one above and one below the tail bone. Held together with your hand a strong downward pull does a quick job of separating the two. To eliminate the chance of spoilage, care must be taken, with a sharp knife, to split the tail all the way to the end. The thin hide around the head, is slowly worked round and round as you cut off the underlying ear cartilage, around the eyeholes and finally off the end of the skull to separate the nose.

The pelt is then placed fur side down and worked with a scraping tool to thoroughly separate the attached fat. It is critical that all meat, fat and membrane be removed, as it will quickly spoil and ruin your hide. With fatty critters like raccoon and beaver this is by far the part of the process I dislike the most, as it is time consuming, hard, messy, nasty work. Of course, the professional trappers have skinning beams and two handed fleshing knives that make this job exponentially easier, however, I did not have access to these tools.

Finally, with the hide cleaned of all fat it was placed on a wooded stretching board with the skin side out, held in place with tacks and left to dry in my cool basement for about a two months, until I was ready to start the initial steps of the tanning process.

Part two of the Tanning Hides Process to be posted soon!
Posted by Rabid Outdoorsman at 1/08/2010