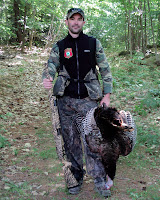 I do not know what possessed me to purchase my second turkey tag of the Maine season. Perhaps somewhere deep in my psyche, lies a sick and demented morning person who revels in the sound an alarm clock makes at 4:30 AM. This love affair with the twilight before the impending sunrise is only magnified by my long beard obsession. Apparently my “ID” is in need of some extensive therapy work to cure me of poultry passion. I wonder what a therapist would have to say about that!

With time on the spring season getting short, I counted the number of days I had left to hunt and decided that I might just as well throw my hat back in the ring. Family and friends would want to hunt, and sitting on the couch eating turkey nuggets is no way to spend a glorious spring morning. After shooting my first turkey of the season on Thursday, I had an uneventful day hunting on Friday. The gobblers were lighting up early morning but nothing was moving around in the fields. Saturday, I put that old curmudgeon Lenny on the exact same set I had shot the first bird and he saw and heard nothing all morning. Meanwhile, I hunted and scouted out another location. Monday, I returned to this identical spot and shot my final bird of the season. At 7:30AM two tom turkeys strutted directly down the side of the field and taking aim and firing, I dropped the lead bird directly on top of my 40 yard marker stake! At 14lbs 14 ozs and having an 8 ½ inch beard and ¾ inch spurs he wasn’t a giant but still a beautiful bird.

If this entire scenario has taught me anything, it is that persistence pays huge dividends. Find a good spot to set-up and be confident in your decision. If you have doubts move but if you scouted hard and know the birds movement, make the commitment!

Lastly, I am sure you have heard me on numerous occasions extol the virtues of my Browning 10 gauge BPS but when the shot counts and you need to reach out and touch something it’s a deadly and powerful turkey machine. I thoroughly enjoy telling the story of a conversation I had with a friend of mine who had just started turkey hunting. He shared that while hunting he had a monstrous tom lock up just past his decoy at approximately 50 yards. Perplexed at how to get the turkey any closer he inquired what he might have done wrong and wanted to know what I would have done in the same situation? I responded that I would have pulled the trigger. Visibly confused and knowing I was an ethical hunter he asked why, I said well, because I own a 10 gauge. LOL!
Posted by Rabid Outdoorsman at 6/09/2010