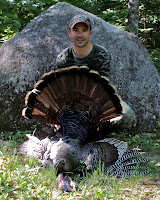 The simple pull of the trigger released an expected but monstrous KABOOM, that echoed across the field, shattering the morning silence with incredible voracity. A rainstorm of ruin, tore through the thin veil of maple leaves, twigs and raspberry bushes leaving them looking like a spaghetti strainer that had been run over by a bushhog. The devastating effect of 10-gauge number 5 turkey shot delivered a lethal payload of shock and awe to the neck of the unsuspecting gobbler. The end result for Tom turkey was almost immediate, in seconds the long beard’s final death throes were complete.

As my muscles relaxed, a huge sigh escaped my lips and I slumped back against the titanic twisted cow pasture pine. Checking my watch it read 7:15 AM, I had been on the sit for less than two hours, with only occasional distant gobbling to keep me hopeful. While expectations had run high, my track record to this point in the season had me less than encouraged. After weeks of attempting to seduce call shy birds, seemingly possessing the supernatural ability to pick out decoys and turkey blinds, I finally decided to switch tactics. 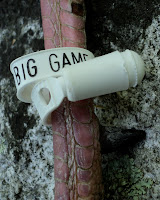 For the seasoned turkey hunter, there are three primary ways to hunt turkeys. In order of preference, for a majority of hunters, these include spot and stalk, sitting and calling and hedging their bets on travel routes. Hunters can of course combine any or all of these tactics to ensure success. Early season, decoys, calling and blinds can effectively be used to harvest turkeys, however, as the season progresses birds quickly adapt and begin to shy away from these attempts at trickery. To combat this predicament, roosting birds at night, heavy scouting and a careful study of turkey behavior will eventually outwit even the smartest long beards.

As the end of the month approaches, patterning turkey movements will put bashful birds in front of the barrel almost every time. Turkeys, like all animals, have specific feeding and bedding (roosting) areas and travel corridors between these zones. The astute sportsman can use this information to distinct advantage. In my case, this involved setting up on a short woods road running between two large fields. In previous outings, I had noted that turkeys were feeding and strutting between these two specific fields and they appeared comfortable using the easy to navigate woods road as sort of a turkey highway. Scouting had also identified large Tom tracks along this stretch of road, further increasing the chance of seeing a large mature gobbler. My extremely simple plan was to pull the infamous tactic sit, wait and see. With any luck, a turkey would be in my gun sight before 9:00 AM. 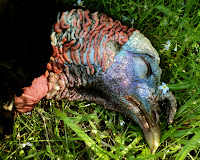 Throwing my turkey vest into the truck at 5:00 AM, I was thankful to have had an extra hour of sleep. Late season hunting calls for late morning starts, to better link with the habits of call shy prowling toms and the sleeping habits of exhausted turkey hunters. I was also extremely grateful that my load of equipment was lacking blind, calls and decoys, all of which had lost their sense of “turkey” appeal over the last three weeks of hunting. To get to untouched birds, it was a ½ hour hike and 20 less pounds of equipment made for an enjoyable early morning walk rather than seemingly endless death march.

Arriving at the base of the large pine on the edge of a small field at 5:45 I could hear low gobbles in the distance and knew that my chances were good. Pre-thought and pre-scouting had me already construct a small blind of dead branches and clear the area under the tree of debris. I supplemented my “natural” camouflage, with a light mossy oak printed netting to provide additional coverage to sparse areas. 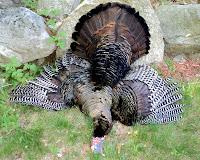 With no slate or box call to yelp on, I was pleasantly content to sit and listen to the awakening morning. An excited chorus of song birds, crickets and crows created such and auditory spectacle that I almost forgot to listen to the approaching gobbles growing louder by the minute. Having been caught off guard by sneaky turkeys, on many occasions, I slowly repositioned and raised the shotgun. Waiting, five minutes passed and a mosquito made a lunch of my eyebrow, 10 minutes passed and my fingertips began to go numb, 15 minutes passed and my arm began to shake. Just as I prepared to readjust, a hen walked into view and I knew that any movement would cause her to signal an alarm putt and the game would be up. In the stillness of the morning, not a breath of air stirred and the shake of my shotgun barrel appeared as disruptive as a hurricane. Still I held on, closing my eyes and concentrating every physical effort not to move. As I opened my eyes, I noted a large red, white and blue head poking around behind the hen and the huge open fan of a mature Tom. While my original plan had been for the long beard to strut his way into a narrow opening on the edge of the field, the hen’s nervous nature had me quickly organizing an alternate route to my target. As the Tom spun his tail to my position, I wasted no time shifting the necessary ½ foot. Seemingly on instinct, my finger slipped into the trigger guard and with a quick twitch of muscle fiber the day was won. 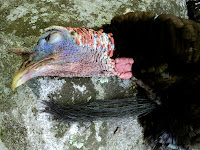 At 17 lbs 8 ozs and brandishing 5/8th inch spurs he wasn’t the biggest Tom to wander to close to the end of my shotgun barrel, however, the 11 inch beard he was dragging beat my previous records by a full inch. To say I was excited would be an understatement! No matter how many turkey or deer I have taken over the years, the thrill of the hunt never seems to be dulled by the passage of time or the number of creatures harvested. I suppose if it ever does, it would be my signal that perhaps my time hunting is over and I should take up other pursuits. In the meantime, my turkey tale is still not yet complete, as Maine now allows the harvesting of 2 spring bearded turkeys and wouldn’t you know it . . . I have another tag and two more weeks of season to fill it!

Happy hunting all and for those of you who have not yet harvested a long beard good luck!
Posted by Rabid Outdoorsman at 6/02/2010