August 2012, I had the distinct honor of being introduced to the impressive "Reaper Outdoors" team, during their Maine Guided Bear Hunt. The shows host, active duty Navy SEAL Ronald Bellan, also know as "Reaper 01", is a true American hero. Just standing next to this guy is something else and knowing that he could likely kill me with a contact lens ripped from my own eyelid, instantly demands respect. All kidding aside, Ron is a true patriot, highly skilled outdoorsman and one heck of a freaking nice guy.

I was thrilled when Ron agreed to sit down with me an answer a few questions I had about military based weapons and their integration into civilian sporting uses. The following is an outline of that conversation. 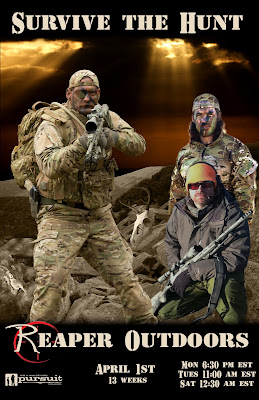 Rabid - Military weapons like the M1 Garand and M16 have a long history of being modified and used by outdoorsmen for hunting and other outdoor sporting pursuits. As a Navy Seal, you have an extensive knowledge of the latest and greatest tactical gear and accessories, what do you see as the next “big” advancement in the evolution of sporting/hunting firearms?

Reaper 01 - I am a firm believer in the basics of weapons for functionality, durability and use. Today we live in a technological world. The future of weapons is leading down the path of technology. There are weapons and optics out there that have a lot of wiz bang gadgets on them, lights, lasers, grips, mounts, just to name a few. As long as they make sense and more importantly, WORK, they are a big asset. The sporting, hunting and military arms race work hand and hand. Each develops weapons for the purpose of killing. Whether it’s an animal or a human, the results are the same, Point of Aim, Point of Impact. I see the M-4 platform becoming an even bigger part of hunting now. Laws are being changed for magazine fed weapons with long range capabilities. Current gun law proposals aside, you see a lot of people hunting with these platforms and many more folks going to the range knocking down targets. 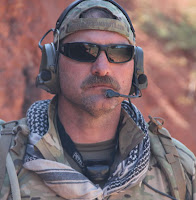 Rabid - What do you think the next generation of gun owners is going to have?

Reaper 01 - They will have what they are brought up on. There are a few things on the horizon for big changes. Suppressors are now being looked at and even used for hunting to keep the noise down on ranges and in the field. Smart optics is advancement in their infancy. Shooters want to shoot further and more accurate. Not everyone can go to sniper school.

Rabid - How about an optic that pins the target, calculates the distance, and adjusts for wind drift and all you have to do is squeeze the trigger?

Reaper 01 - It’ coming, in fact it’s here. It cost a butt ton of money but when the price is brought down people will be flocking to the gun stores. Muzzle breaks are becoming more popular and the advancements are taking hold in the hunting and shooter world. The development of deflecting the muzzle blast for better follow through and better accuracy is becoming a norm on weapons. The weapons and optics we currently use in the military will be on the hunting grounds and on the ranges. Light weight stocks, heavy barrels, bolt action, semi auto, night vision, muzzle breaks, lasers, and smart optics all have their place on the hunting grounds. As long as the industry isn’t compromising our protectors (law enforcement, military) and people are using them right, the shooting world is in for some amazing range time ahead. The Reaper Outdoors Team hunts game in some very remote and challenging locales. Because of the stresses on equipment your gear and firearms must be “battle hardened” to withstand the rigors place against them in the field. 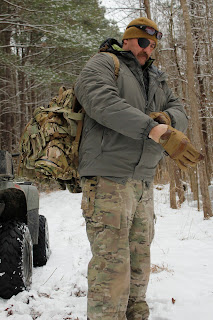 Rabid - Do you have a preferred hunting firearm, optics and ammunition that have proven effective in these conditions?

Reaper 01 - Our equipment has to withstand harsh environmental conditions from deserts, high mountains, and plains, cold and hot. It also has to work in all weather conditions. I currently reach for my trusted .308 Remington Model 700 varmint rifle. The Remington Model 700’s have been proven on the hunting grounds and the battlefield. I had mine modified from a 26” barrel cut down to 20”s and threaded a PWS (Primary Weapons System) muzzle break on the end. The PWS M216 7.62, is a semi automatic weapon I use when the laws allow it for hunting.

Hornady ammo is our store bought ammo of choice. The consistency of the rounds has proven to be spot on. I have had nothing but good tight groups at long range and my cold bore shot, 2nd and 3rd round impacts are always grouped and accurate at long ranges. We use Hornady for all our ammo needs. I use various optics from, scopes to ACOGS. I will tell you which handled the toughest of terrain, weather and dings. On my weapons to list a few, Aimpoint, Trijicon, Night Force, and Bushnell (waterproof scopes).

Rabid - Most modern military firearms are based on the 9mm, .308 and .223 calibers what is your preferred caliber for hunting large game (Moose, Deer, Bear, Etc) and for hunting small game (Coyotes, Bobcats, Mt. Lion)? 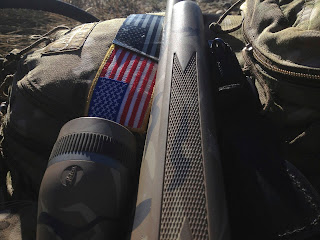 Reaper 01 - I like having an all around caliber that will take down most big game animals. This is why I choose the .308. It has a wide range of ballistics that allow a short or long distance shot that will still maintain the kinetic energy to make a clean kill. The .308 round has a wide range of loads, very common accessible bullet and accurate. I also like the 300 win mag for it even further reach and punch.

For varmint and small game, I go right to the battle tested .223 for its accuracy and small caliber punch. Again, a very common and accessible round that doesn’t leave big holes if I want to use the hide. Another round we use is the 22-250. This round is a fast, flat shooter that, allows a load for small game to larger game such as the Whitetail deer. This is actually Reaper 03’s weapon of choice for a lot of hunting.

Rabid - During your adventures afield, do you carry a side arm? Type and caliber?

Reaper 01 - I do carry a side arm. The pistol I carry depends on the animal I am going after and the state hunting regulations. The main weapon of choice for hunting is my 357 magnum Smith and Wesson 686 revolver. It has great punching power and takes the abuse of living in the wilderness. The other pistol I carry is a Sig P226 9mm. I enjoy having that on my side for protection and the amount of rounds it holds.

Rabid - Military based camouflage is based on a basic digital model of concealment, while civilian camouflage is typically more complicated and centered regional and sporting pursuits. What is your preferred camouflage pattern?

Reaper 01 - Military camouflage is developed not only for concealment from human eyes, but around an array of counter technology detections. Military camouflage doesn’t always work for hunting animals, mainly because of how it is broken up in straight lines. MultiCam is the preferred Reaper Teams camouflage of choice. It gives a wide range of environmental concealment. We’ve tested it in desert, grasslands, and woodland. The results were amazing on how it blends in and how it beats out the commercial patterns that are on the market today. The technology on how the pattern with the materials is impressive. 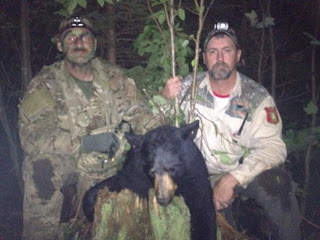 Rabid - You recently came to Maine hunting black bear, what did you think of the Maine wilderness?

Reaper 01 - The Maine wilderness was surreal, wild and beautiful. We canoed into our layup site (base camp), and then our hunting area every day. We experienced the thickness of the woods, bogs and waterways. We also encounter moose, bear, grouse, rabbits, and of course fish. The wilderness is vast, challenging, tranquil, and down right incredible. The environmental challenge for the Team was the survival and navigation front. We were able to utilize a wide range of the terrain and different landscapes and waterways to navigate and survive. Our main food source came from the water with the bounty of fish and vegetation. 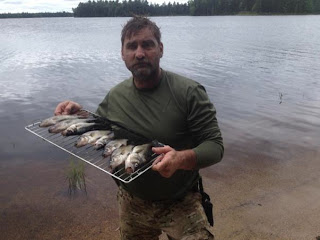 Rabid - Was your operation a success and all that you had hoped it would be? When will the Maine episode air and will it be available later on youtube?

Reaper 01 - Our mission was to infiltrate the Maine wilderness, survive, and hunt down the great Black bear with a bow. We accomplished our mission. We ate fish, lily pad bulbs and wouldn’t you know it, got a nice Black bear with a bow. The experience was all we had hoped it would be and beyond. Our good friend and guide Matt from, Eagle Mountain Guide Service set up the operation and let us do our thing.

**All shows will be loaded on our website www.reaperoutdoors.com after the show has aired that week. We will also be loading up video’s, gear lists and reviews as the hunts air. Make sure to sign into our Website and become part of REAPER Nation.

Thank you for taking the time to read this,