The Old Man Shoots a Moose 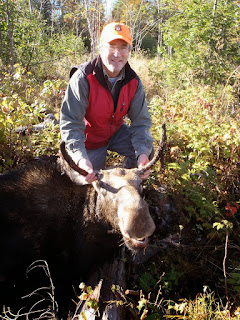 Sitting in the hot and crowded gymnasium in Rangeley, I almost fell out of my seat when I heard the old man’s name called over the loud speaker. After over 20 years of applying, Dad’s dream of being drawn for a coveted moose tag had finally come true. The months, after the initial exhilaration of the drawing, dragged by slowly but as September edged closer, Dad’s excitement reached crescendo. Having participated on my own moose hunt in 2004, I well understood the difficulties inherent in hunting moose. Despite all these complications, I relished the challenge of helping Dad shoot a moose.

Drawn for a bull permit in zone 2, Dad’s chances of shooting a bull moose were exceptionally high and even further increased, by our stay at Red River Camps, a remote outpost located deep in the middle of the zone. Due to challenging work schedules, Dad would be unable to arrive at Red River until late Tuesday afternoon. Further complicating matters, my brother and his strong back would only be with us until Wednesday evening . . . we need to shoot a moose and quick!

Having a more flexible work schedule, I arrived on Sunday and spent all day Monday and Tuesday scouting. While scouting, I watched 20 bulls get hauled out of clear cuts, shot by other hunters…it was a scene I found both thrilling and frustrating. Dad and my brother arrived at camp Tuesday afternoon and after quickly dropping off supplies and a large trailer at camp, we proceeded to inspect a few of the locations, I had scouted previously. We pulled onto a short secondary road, carefully got out of the trucks and using a small electronic hand held caller, set forth a few loud cow in heat bellows and were shocked when a bull responded only 60-70 yards away. Quietly picking our way down a short logging road, a huge bull violently emerged from the underbrush, took three steps into the road, turned and disappeared as quickly as he had originally appeared. I could hear Dad’s heart beating from 10 yards away and I motioned for him to take a knee and brace his rifle. After an hour of cow calling, the light began to fade and we were forced to give up on the old behemoth bull. Meandering back to our vehicle, our conversation was energized, hopeful and filled with the promise of what the next day would bring.

After a night of restless sleep, we plowed full force into Wednesday but despite monumental efforts including hours of driving, sitting in clear cuts and calling, we were only successful in spotting several cows and a calf moose, not a single bull was seen. As quickly as the bulls had appeared, they had also as quickly vanished. With the setting of the sun, we said our goodbyes to my brother and we retired Wednesday night with tempered hopes.

Thursday morning we were beginning to feel the pressure and despite the urge to explore new logging roads, ultimately we decided to stay in our core area, knowing that moose were plentiful and if we were persistent, luck would eventually turn in our favor. Slowly driving down the first road of the morning, I remarked to Dad that he had to stay vigilant as a moose could at first look like a rock, bush or even that fallen tree . . . just as I said the words “tree”, the “tree” we had booth been looking at moved and standing broadside was a large cow moose.

I stopped the truck and told dad to get out load his gun. While I was not completely certain that the cow was traveling with a bull, I determined it was better to be prepared than scramble at the last minute. Dad and I sat for over 20 minutes watching the cow quietly feeding and were just about to give up hope when a small bull emerged from the woods only 20 yards behind the cow. For such a large creature, the moose is a master of camouflage, practically impossible to see in the deep dark Maine woods when not moving. Seconds later, a thunderous shot erupted from Dad’s Marlin XL7 .30-06 and the moose dropped. Standing there in amazement, at how quickly our luck had changed, we watched in disbelief as the bull slowly began to stand. Again the .30-06 barked and again the moose dropped, this time for eternity.

As the adrenaline subsided, Dad and I began to comprehend the impossibilities of the situation. The moose lay 200 yards up wildly overgrown tangle of spruce swamp, filled with sink holes, fallen logs, stumps and hazards where no man should ever venture. Even equipped with tow ropes and a come-along, the situation looked grim. Our woes were further compounded, by a temperature that at 8:30AM had climbed to 70 degrees Fahrenheit. While we had brought plenty of gear and ice filled coolers to properly extract, butcher and pack out the moose, all this equipment was back at camp, a two hour round trip. We had both made the cardinal mistake of complacency, firmly believing that Dad would likely not shoot a moose that morning.

While guiding bear hunters, I once witnessed two men dissect a 365 pound black bear in a little over an hour. Knowing this, I determined that Dad and I equipped with axes and knifes, could dissemble this small bull and hand carry it to the truck in a relatively short expanse of time. Working together, with one man cutting and another carrying, we could potentially transport the entire moose out of the woods, without the need to tow it out and use a trailer. Though understandably a herculean effort, it was still highly feasible. Though this solved our problem of not having ropes or a trailer, it did little to solve our issue of not having a viable place to put the meat where it could be kept from spoiling. Eyeing the large blue tarp in the back of the truck, I hatched a plan to construct a large container in the trucks back seat to hold the meat and by running the air conditioner on high, keep the meat at a cool temperature until it could be transported into town for butchering. With a plan in place, the old man and I began cutting and carrying and by 12:30 PM had managed to cram the entire back of my Toyota extend cab with moose meat. The head we placed in the back of the truck, to comply with Maine law requiring a visual presentation of a harvested big game animal. Pulling into the game tagging station in Patton, Dad and I received a very surprised look from the attendant as he noted the moose carcass crammed into the back of my truck. While I am certain that he likely has seen some pretty amazing bull moose in this day, I doubt he will ever forget the day the guys showed up with a moose in their back seat.

Sometimes despite how much you plan and prepare, things still go wrong. Being resilient and able to overcome problems is the key to “Yankee ingenuity” or our exceptional ability as Mainers to understand and overcome difficulties.
Posted by Rabid Outdoorsman at 9/09/2015