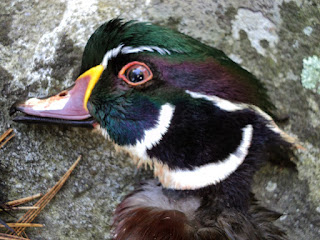 I took Dad out this past weekend for a bit of duck hunting and in the process, I think I blew the poor guys mind. Though he certainly shot ducks in the past, his last experience waterfowl hunting occurred almost 40 years ago. In his youth, a majority of his waterfowling consisted of crawling on his belly along marsh edging and jump shooting. When I inquired how the downed ducks were retrieved, he responded that he and his brothers would simple swim out and get them. BRRRR! Apparently duck hunters were tougher back then!

Dad laughed at the number of decoys I put out and almost fell over backwards when I pulled out the battery powered spinning wing “Mojo” and placed it on a long steel pole in the center of the marsh. He gave me one of those "looks" and then inquired if that THING would actually attract ducks. I insured him that it would and was shot a highly skeptical glance. We had a beautiful morning, the ducks flew well and Dad and I both had our fair share of shooting. Well, as you can imagine, Dad called last night and wants to go out hunting again this weekend . . . I am going to go out on a limb and assume he had a GREAT time! After I hung up the phone, I began to ponder just why Dad had such a fantastic time? Granted anytime a father and son are able to spend quality time together it is always a special occasion but what other elements combined to offer Dad such a thrilling adventure? The secret I determined is that whether hunting with veteran hunters, newbies, youth or practically anyone, it is critical over all other aspects, to end the day on a positive note.

While being warm, well fed, hydrated and comfortable certainly rank high on the list of factors contributing to a successful outing, a man, woman or child will temporarily ignore minor discomforts when the prospects of game are plentiful. With duck hunting, success is contingent on knowing well the area you hunt. Start scouting well before the season begins and watch and listen for ducks flying at dawn. While extensive scouting is critical, hunters short on time and looking for that special “waterfowl nirvana”, contains the proper balance of food, shelter and security that the ducks find intoxicating, should explore “fowl” spots like the East Machias River (Delorme’s The Maine Atlas and Gazetteer (MAG), Map 26, A-2) in the vicinity of Oak Point Meadow (Map 26, A-2) and the junction of Rocky Lake Stream (Map 26, A-3). These areas have long held healthy populations of waterfowl guaranteed to end anyone’s hunt on a positive note. 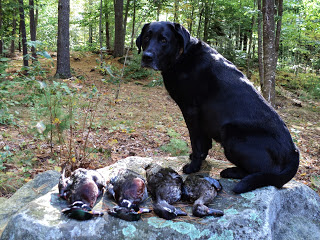 While sharing time with friends and family in the warmth and comfort of a duck blind is fun, some days it pays to stay mobile, pursuing ducks on small rivers, streams and creeks with a canoe. When these areas are filled with aquatic vegetation and surrounded by overhanging oak trees they are also typically filled to the brim with wood ducks.

As a waterfowler, there is no greater prize than the harvesting of a wood duck drake. An incredibly vibrant colored creature, it is easily the prettiest duck and a true personal trophy. Small, speedy and often times difficult to call, they are an immensely challenging duck to shoot on the wing. I shoot a Franchi semi-automatic 12-gauge, with a modified choke and prefer 2 ¾ inch loads of No. 4s for wood ducks. Shooting is typically close and fast and the generous pattern and low recoil combine to allow a hunter to more easily stay on target and deliver follow-up shots if necessary. Shoot fast at the first good opportunity as wood ducks won’t make multiple swings.

When a wood duck is shot, carefully mark where it falls and be ready for a finishing shot. For such a small duck woodies are tough and notorious for diving and never returning to the surface. Wood ducks prefer cover, so while canoeing backwaters, pay close attention to heavy vegetation, stumps, downed branches, toppled trees and other places where the birds are out of the water but still close by while resting. Often times a hunter won’t even see the ducks till they burst wildly out of cover, screaming their characteristic WEEEEP, WEEEEP, WEEEEP call.

A slow canoe trip down the Little River (Map 35, C-4) or Musquash Stream (Map 35, C-5) and other similar waterways are sure to produce wood ducks early in the season before cooler temps force them south. Hunters harvesting wood ducks or “woodies” are richly rewarded, as their delicate, light red meat is tender, mild, and juicy, ranking them as the most delectable of all duck species.

Care must be taken however as any duck thrown into the muddy reeds on a warm October day is going to taste bad. Instead, carry a small (camouflaged) cooler with some ice and place the ducks inside until returning home where they can be properly cleaned. Wood ducks are naturally delicious and as such many hunters make the mistake of “over preparing” them for the dinner table. The best wood duck recipe is one that allows the natural rich flavor of the duck to present itself and not be drowned out by sauce or other flavors. One of my favorite recipes for wood ducks is cutting breast meat into one inch cubes and placing on a skewer alternated with chunks of canned pineapple. Cook the meat to medium rare, allowing the pineapples to lightly caramelize on the breast meat, leaving behind a light, sugary irresistible flavor.
Posted by Rabid Outdoorsman at 10/26/2015