Turkeys in Central Maine as Thick as the Ticks! 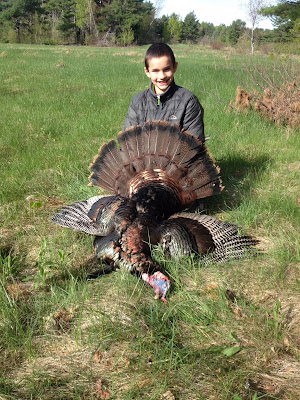 Last season, my son dropped the hammer on his biggest tom turkey to date, a 20.2 pound bruiser of a bird shot during the first week. It was a long morning hunt and we had almost given up for the promise of McDonald’s breakfast sandwiches, when the woods were rocked by his impressively loud gobble. My son barely had a chance to collect his composure and get his shotgun into position before the behemoth strolled into range. Thankfully, old Tom was too transfixed and ready to pick a fight with our Avian X Strutter to worry about our erratic movements. Well, a deep breath later, my son took the shot and old tom was meat.
I have to say, after an entire season of using the Avian X Strutter this large bulky decoy is well worth the extra effort and weight and I am absolutely hooked on its effectiveness and wouldn’t dream of hunting without it. Last season, I guided my son and a family friend in harvesting two toms over 20 pounds and 18 and 19 pound birds for myself. In an open field, this decoy has the size and realism to pull in big Toms and even curious jakes (early season) from long distances. Basically if they see it, they’re coming in for a closer look.
Turkeys Thick as Ticks!
On the heels of last year’s impressive season, now a full year later, the final hours are ticking down to one of the most productive spring turkey hunt I have ever seen. I don’t remember the last time I walked into the woods and had turkeys gobbling on every cardinal point of the compass...and them some! I had a premonition that this season was going to be great, as I watched the fields last fall and saw dozens of hens with huge broods numbering 6-7 poults. In addition to the healthy brood sizes, I also noted large flocks of turkeys inhabiting almost every field I passed. I felt at times, I would have a difficult time stepping in the woods without stepping on a turkey!
Turkey Troubles
All of the sightings and the excellent spring hunt, seem in direct contrast to the turkey numbers being reported throughout the eastern United States. Decreasing turkey populations seem to be growing to record proportions, as reported in such states as Missouri (down 30%), Mississippi (down 34%), New York (down 40%) and Arkansas (down 65%). The National Wild Turkey Federation reports that in 1973, there were approximately 1.5 million wild turkeys in North America. After 40 years of effort, that number reached a historic high of about 6.7 million turkeys. Today turkey numbers are creeping downward and are currently estimated at between 6 million birds. Wildlife biologists say these recent declines may not be long-term, but they do warrant close monitoring. Among the listed concerns, scientists feel that in some areas birds have reached carrying capacity and have declined as the capacity of the habitat to support a certain number of birds has declined. If the habitat conditions decline across multiple counties and states, then birds have no choice but to decline with it. Another factor, in the mix, is that turkeys are extremely susceptible to diseases including blackhead, avian pox and West Nile. To avoid any fears of disease transmission to humans, turkeys should be cleaned using rubber gloves and all instruments used in butchering thoroughly cleaned. Also when cooking turkey meat, the USDA recommends cooking it to an internal temperature of 165 F.
Tough Turkey
Now I like to shoot big tom turkeys just as much as the next guy but when it comes to eating big birds they tend to be on the tough side. To combat this issue, grinding the meat before meal preparation is immensely helpful. Ground turkey meat can be used in soups, tacos, made into meatballs or my children’s favorite, ground turkey nuggets. To try them for yourself, try this simple recipe.

Take out three small bowls and add the flour to the first bowl. Crack the eggs into the second one. Add the breadcrumbs to the third bowl. Put the ground turkey in a large bowl and mix in the salt and Parmesan cheese. Put some flour on your hands and make a ping-pong sized ball. Set the ball on a cookie sheet and continue until all of the turkey has been made into small balls. Roll each ball in the flour, dip in the egg, and then roll in the breadcrumbs. Place back on the cookie sheet and then flatten gently. Repeat until done.
Heat olive oil in a large skillet over medium-low. Place the turkey pieces in the skillet and cook for 2 minutes. Flip over and cook the other side for an additional 2 minutes. After they have been slightly browned on each side, place back on the cookie sheet and bake at 375 degrees for about 8 minutes or until cooked all the way through. Serve hot with honey mustard (see recipe above) for dipping!!