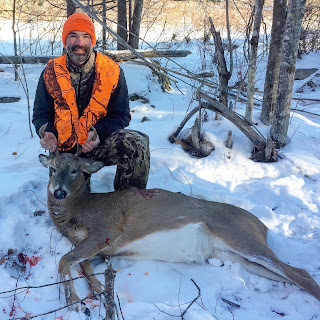 I’m not a great hunter, I just have an extremely high tolerance for pain and suffering. Because of this physical malfunction, I am capable of spending hours in the extreme cold and freezing rain that would typically sends other hunters running for shelter. Statistics alone predict that the longer a person spends outside, actively hunting, the greater the chance of success. When the going gets tough, I put on a heavily insulated jacket, expedition boots and fill up my pockets with heater packs. Equipped as described, I can shiver in a tree stand for hours, bordering on the very edges of hypothermia, without actually teetering into the necessity of heading for home. No greater test of this ability was more apparent than my time spent hunting during the 2018 deer season.

After shooting a 125 lb doe during the first week of expanded archery season, I got cocky. In my brash and boastful confidence, I had momentarily neglected to remember that deer hunting in Maine is seriously hard work. Success in the woods does not come easy, but in my quick harvest, I had mocked this critical detail. I was however soon to learn this harsh lesson and learn it well.
The remainder of September flew by with multiple deer sightings but nothing that approached to within effective bow range. October also flew by and then came November. By November, I had given up my bow and picked up my rifle, despite the technological advantage of hunting with a firearm, the deer continued to evade me. November also rushed by too quickly and with just three days left in the season, a brutal cold front dropped temperatures into the single digits, encouraging many hunters to end their season early.
Undeterred by the low temperatures, I spent 8 hours outside on each of the two days leading up to the final day of the 2018 deer hunting rife season. On the final day, I climbed into my stand at 5:00 am. There was a chilly breeze blowing off the lake and the forest floor was covered with about 5 inches of newly fallen snow, the wind chill pushed the morning temperature to -10F.
The carpeting of snow allowed visibility for hundreds of yards through the mixed hardwoods, the white contrasting sharply with any animals that scampered past. After about two hours of carefully scanning the woods for deer, I was shocked when 50 yards away a deer stood up on the edge of the lake, after having been bedded there all morning. I swung the rifle, placed the cross hairs on the forward shoulder, exhaled an icy breath, paused and fired. The deer ran 50 yards and collapsed. Walking to the original spot of impact a bed was melted down to bare ground and still warm. The blood trail was scant, having been almost completely absorbed by the dry, powdery snow. As I approached, I realized that the deer was much bigger than I had originally estimated, with a crown of 7 points, the deer became the second biggest of my hunting career.
What did I learn?
A Maine hunter’s single biggest ally is patience. Deer hunting in Maine is an excruciatingly frustrating experience. Hours of stalking or sitting are typically rewarded with noisy red squirrels, rain, snow and freezing temperatures. Why I continue to hunt can only be explained by those few flickers of success that sometimes seem to occur more based on luck than skill. Most Maine hunters seem to have the innate ability to harness a high level of patience and in my experience, the best hunters always seem to be the most patience.
Consistency kills almost as many deer as patience. Washing clothes regularly in scent eliminators, checking the rifle or bow aim point a couple times during the season, scouting on Sundays and hunting no matter what the weather conditions. The only time I have seem consistency fail is when hunters consistently sit in a stand or stalk a section of woods over and over with no viable deer sightings. Deer cannot be shot where no deer exist. If hunters are not seeing fresh sign they need to move on and change up the game plan.
Below Freezing Deer Hunting Tactics
When temperatures dip below freezing, regular scent wicks freeze and scent dispersal becomes limited. To keep scents working, when temperatures plummet, hunters should check out the esterous scented candles by www.hottrails.com. Their Hot Scent Candle Starter Kit comes with 1 black lantern and 4 Doe-N-Heat candles for the bargain price of $31.58. Last season even as the temps dipped to single digits and the wind blew, this kit continued to pump out scent for hours.