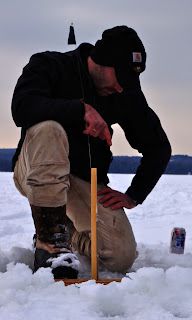 On Thin Ice
On December 7th 2018, I was fishing with a friend on Togus Pond. A car drove by and asked us, “How much ice?” When I replied, “Three and a half inches.” The driver responded, “You guys are $%&* nuts!” Likely unknown to the driver was that we were only fishing in water less than 2 feet deep and ventured no further than a dozen feet from shore. When ice fishing during the early season, there is no reason to risk life and limb when brook trout are frequently found in shallow water only a few feet from shore. While nobody wants to take an icy plunge through the ice in December, if it happens in two feet of water, it’s an inconvenience and not a tragedy.
Spud Light
Thin early season ice means little effort is required to pop in holes. Typically this task can be easily accomplished without the use of an ice auger. Ice fishermen can instead use an ice chisel or a “spud” to punch the necessary hole in the ice. This means that it’s not necessary to lug around a heavy auger, a task that as I grow older has less and less appeal.
Keep it Light
When ice fishing brookies, it pays to modify fishing outfits to match the intended target species. Success often is easier won when heavier “pike”, “salmon” or “togue” sized fishing rigs are replaced with lightweight tackle such as 4-pound leaders, BB sized split shot and miniscule number 10 sized hooks. Also using alternate baits can entice finicky brookies into tripping flags. Last season while fishing Savade Pond (MAP 13, C-3) three of us caught our limit of trout using Northern Redbelly Dace while our closest neighbors caught nothing using Common Shiners. Also, when baitfish fail to do the job, try using a small piece of earthworm an inch long, it is sometimes the light snack trout are looking for. In freezing temperatures, keep worms inside a jacket pocket to keep them from becoming unusable. Be sure to check lines frequently, keeping ice build up to a minimum and ensure bait remains fresh and active. Often the act of slowly lifting and lowering lines will “stir the bait” and elicit a strike.
A Bit of the Measure
One handy tip I picked up this ice fishing season is using a 25 foot tape measure to determine water depth. In shallow water (less than 25 ft.) this method is much faster and more accurate than the standard practice of tying a weight to the line. Additionally, by gently tapping the end of the ruler on bottom, anglers can quickly determine if the bottom is rocky, sandy or muddy. Using this method, I found that by taking along a notepad and paper I was able to drill, measure hole depths, record the information and map the entire fishing area in minutes. If wishing to set lines at a specific depth, I lay the tape measure on the ice and stretch out the fishing line along its length, this makes dropping the lines to correct depth extremely accurate.
Deeper PRO
Individuals preferring a more technical method of measuring ice hole depth would be impressed by the Deeper PRO Smart Sonar ($189) portable wireless fish finder. This cool hi-tech piece of equipment is a must for ever avid ice fisherman. The device wirelessly generates its own Wi-Fi signal, syncing with smartphones and pairing with the companies free Deeper App. The Deep PRO dual beam sonar is capable of scanning down to 260ft. Find fish, their size, suspended depth as well as underwater structure, vegetation, bottom contour, hardness, water depth and temperature.
Stocking Reports
Several lakes and pond in the central Maine area receive generous stockings of 10 inch brook trout. As mention previously, my favorite spots include Togus Pond in Augusta and Savade Pond in Windsor. As of this printing, the stocking reports had not yet been posted, however, both these ponds historically receive hundreds of brook trout in October and November ranging from 7-18 inches.
Overcast Skies and Flags Will Fly!
Brook trout, do not bite exceptionally well for 48 hours after a low pressure system. However, fish do tend to feed aggressively 24 to 36 hours before a low pressure moves through. When the weatherman predicts temperatures in the 30’s, overcast skies and flurries, it’s going to be a good day to fish!
Posted by Rabid Outdoorsman at 12/01/2019