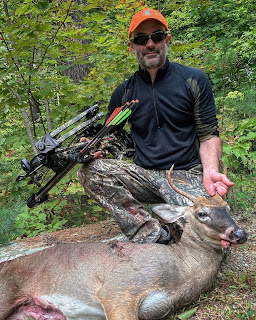 Expanded Archery Opener… Done In 15 minutes!
Arriving at my hunting blind about an hour before legal, I settled in for what I anticipated would be a fairly uneventful morning.
Though I had scouted out and picked a spot that I felt would be productive, upon arriving at the parking lot, in the wee hours of the morning, I was surprised to see that several other vehicles were also parked and several other archers were also preparing to hunt the property. After talking with the other hunters, a game plan was formulated so that we wouldn’t interfere with each other’s hunt. Barely had I sat down and I noted multiple headlights headed in my direction. Apparently, nobody listened. Well, it’s easy to get worked up about things and much harder to let things go . . . I opted to have a great morning regardless and just let things go. Both hunters walked by my blind casually chatting, neither had any clue I was sitting there.

Staring at my phone, I impatiently counted down the minutes till legal, trying to remain optimistic. Unknown to me, at the time, was that the two hunters, that had previously passed, bumped a doe that slowly walked by my stand only 15 minutes into legal shooting. Taking careful aim, I fired and had my first deer down of the expanded season.

Friends of mine were also hunting the property and assisted me in hauling the deer back to the truck. Through these friends, I later found out I was the only hunter on the property to shoot a deer on the first day. It just goes to show, that even when the odds don’t seem to be in your favor, sometimes they actually are and sweating the small stuff never does any good. When hunting this season, stay positive, be considerate, be kind, help others whenever you can, be ethical and if necessary even turn the other cheek.

No Crossbows in Expanded Archery

Governor Janet Mills expanded hunting opportunities by signing into law Legislative Document 27 (LD 27), "An Act to Allow the Use of a Crossbow for a Limited Duration during the October Archery Season on Deer and the Fall Season on Wild Turkey.” The purpose of LD 27 is to provide additional opportunities for hunters to pursue deer. Currently, the archery season on deer is four weeks long, and the average whitetail take during a season is 500 deer taken by approximately 10,000 hunters. This is obviously an abysmal success rate. IFW feels that the use of crossbows during the October archery season will not markedly increase harvest rates on bucks or result in negative consequences for the deer population. Additionally, research studies, conducted by states who have implemented similar laws, have shown that allowing more crossbow hunting would increase hunter recruitment numbers, adding more new hunters to the sport. Overall, more crossbow hunting is good for our wildlife, our hunters and our state.

The new crossbow law officially began on January 1, 2020 and will last for 3 years and then be re-evaluated. The law expands crossbow hunting to the regular October archery season on deer and the fall wild turkey hunting season. The law specifies, however, that, “a person using a crossbow during the open archery season may not harvest an antlerless deer unless that person possesses an antlerless deer permit. Also, by Maine law, a crossbow is not considered a firearm. A person may hunt any wild bird or animal with a crossbow during any open season on that bird or animal while still following all the other laws pertinent to that species, except that a licensed crossbow hunter 64 years of age or younger may not hunt wild turkey during the fall turkey season or hunt deer during the expanded archery, special October archery or muzzleloader seasons. Hunters 65 years or older, or who have a special handicap permit to use a crossbow, may use a crossbow for any species in season with the appropriate permits.

Unfortunately, even though this law certainly is progressive and a step in the right direction for the sportsmen in this state, it still comes up short, first in its limited duration or “test” implementation and second in not allowing sportsmen to hunt with crossbows in the September expanded archery season.

Those sportsmen who can’t seem to get enough of technology, will love the Breadcrumb Bluetooth Trackable Nock. This nock enables hunters to track their arrow or crossbow bolt right from their smart phone. Using the Breadcrumb Tracking App, hunters can accurately locate arrows or bolts from distances of 50+ yards away. Once in range, simply follow the signal strength indicator on the App to lead directly to the arrow or bolt. Hunters may also use their phone to activate the nock’s sound beacon in order to reveal an arrow’s or bolt’s hidden location. MSRP: Three Nocks for $119.99.