New Addition to the Family (The Purchase)

This blog article will be comprised of a three part series: first “The Purchase”, secondly “On The Range” and finally “Field Test”.

I have to admit that as I walked into the gun shop, I was not anticipating leaving with a new firearm but some deals are to good to pass up. I had been for two seasons looking for a small rifle in .222 or .223 that I could use for varmint hunting. My primary quarry would be coyotes so I was in the market for a long range light caliber. Researching more, I stumbled upon an article in The Maine Sportsman that described a relatively new rifle that was being marketed by Harrington and Richardson Rifles (formally New England Firearms). The small and lightweight single shot rifles were available in a huge selection of calibers and priced under $300. I figured that if I waited a little bit someone was bound to purchase one of these “new” rifles and later decide that they wanted to upgrade to something different so I waited and kept checking the used gun shops. 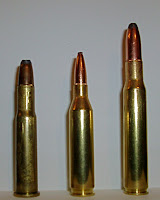 In the meantime, I continued to examine the available calibers and finally came to the conclusion that if I went with the larger .243 Winchester cartridge I could use it for shooting coyotes out to 200 yards and it would additionally make an excellent introductory deer rifle for my sons someday. For those of you unfamiliar with the 100 grain .243 (Ct.) cartridge note the picture to the left that compares the round against the wildly popular 170 grain .30-30 (Lt.) and 220 grain .30-06 (Rt.) Springfield rounds.

As I walked down the row of used firearms, my heart began to race as I noted a Handi-Rifle with black synthetic stock and fore-end in .243 caliber. Examining the rifle, it appeared to be in excellent shape and as I mounted it to my shoulder was pleased by its light weight and maneuverability. With a little bit of negotiation, I took it home for $175.

The only issue I have personally with the rifle is the sighting system. For my length of pull and the stock size I had difficulties lining the sight up properly. This issue was immediately solved, however, when once home I installed the correct Weaver base, Simmons scope rings and old Tasco “Pronghorn” 3x9x40. With the scope installed it mounted quick to my eye and (for the price of the optics $25) provides great visibility.

After downloading the owners manual off the website (www.hr1871.com) I noted that the rifle comes equipped with a very interesting safety system. The “Transfer Bar” type safety mechanism allows for the hammer to be in the un-cocked position and the trigger fully forward and still there is no contact between the hammer and the firing pin. This allows for added safety should the gun be bumped or dropped.