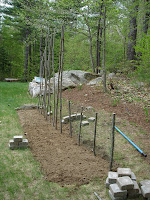 I managed to set aside part of the weekend to quickly expand the garden by adding a 7’ x 12” row of spinach and 80 pole bean plants on 10 poles. I also erected a chicken wire fence to use for the impending crop of cucumbers. My thought is to get these vine plants growing up rather than out and in the process save me valuable garden space. Time will tell if my experiment will be worth the extra effort.

Seemingly motivated by several rainstorms this past week, I have been amazed that my tiny garden is starting to grow with increased vigor! Every row seems to be showing some sign of life with tiny sprouts pushing through the soil with delicate green leaves. As the vegetables have sprouted, so have several varieties of weeds including grass, clover and other obnoxious greenery. I remain hopeful that my close quarters (French Technique) planting will eventually drown out these invaders and leave me with a garden that requires little “tending”. 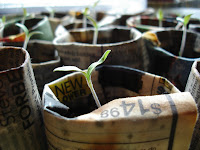 My inside plants, started on 4/25, consisted of a perhaps an over zealous 40 tomato and 20 red pepper plants followed by 20 more tomato plants on 5/7. My initial assessment of the tomatoes and pepper is that the tomatoes seem to be growing very well but the peppers are progressing at a MUCH slower rate. At first I thought that none of the peppers had managed to germinate but in the last week several have managed to begin peaking through the soil. Encouraged by the recent growth, I planted 20 more peppers, 20 cucumbers and 10 additional tomatoes on 5/10 and am hopeful that they will also begin to produce within the next couple weeks.

If anyone noticed in the photo of my starter tomatoes I have some interesting pots made of “recycled” newspaper. The easy directions for how they were created can be found on wikkihow. While they require much more work than the store bought containers they are also free, easy to make and great fun for kids to construct. 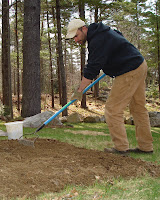 As I peer at the calendar, I note that yet another week of spring slips by and the season of planting veggies is quickening its pace. Let this Memorial Day weekend be my guide in finalizing the last of my seed planting. Two weeks after the holiday, I will attempt to plant my inside grown peppers and tomatoes in garden number two.

Though far from being a green thumb, I have to admit that most of my initial feelings of anxiety experienced during my beginning planting have subsided. Eyeing my growing crops this overcast Sunday afternoon has left me with a feeling of confidence that I can actually grow something. I have no doubt that most seasoned gardeners reading this post will chuckle at my total lack of inexperience in things “green” but I am also sure that others out there will completely sympathize with my trepidation.
Posted by Rabid Outdoorsman at 5/11/2009