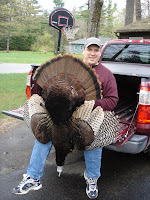 The following write-up was completed by a good friend of mine and a fellow turkey hunting fanatic. Enjoy!

It has been a long turkey season....

Day 1: Get up at 3AM. I got my dad his turkey on the first morning. We had 6 Jakes, 2 Toms and a Hen in front of us. I called the Jakes in and kept them at the decoys. The 2 toms came in about 20 minutes later and
started to chase the jakes around. When they cleared the jakes, my dad picked out the bigger of the 2 toms and let him have it from 40 yards away. The bird never flinched. I passed on the smaller tom...only had a 4 inch beard and seemed smaller than the one my dad shot. Dads bird: He was 18 Lbs and had a 7 inch beard. We then drove to an abandoned apple orchard where we heard a bird gobbling from the road... Snuck in and setup... called to him but he wasnt having any of it....stayed out of site and moved past us up into the woods. We checked a few more spots and called it a morning....

Day 2: Rise and shine...3AM Went and setup in the apple orchard. Nothing.....checked a few more spots and saw some birds but no luck. Went to the spot where I shot my bird last year. There was a gobbler in the
field with a hen. Went and setup but he was long gone with the hen by the time we got settled.

Leonard with his first Turkey ever! From the smile on his face I would say he is hooked!

Day 3: Man am I tired...3AM again. Went back to where my dad got his bird on Day 1 and had birds everywhere. There was a hot hen and several toms and jakes all tree'd up. I was calling with the hen....sort of competing with her....and got a small jake to come to the decoy....I had my mind made up that I would take anything with a beard. He was only a small jake with little to no beard so I passed. Left that location and went back to the apple orchard. Heard the gobbler again and this time got setup in the orchard. As soon as we got setup, one bird had snuck in behind us and was gobbling from 30 yards behind us in the woods. He saw us or something and immediately fled the scene. The other gobbler we heard from the road was making his way through the field toward the orchard. We were behind a rock wall and there was a short pine tree obscuring the view into the orchard....bad setup. I called that bird from 400 yards away and he came into the orchard and setup on the other side of that darn pine tree....for an hour and a half I called to him and he gobbled and gobbled and gobbled....less than 20 feet away. he simply would not come out into the open. Finally, it took a stick and started scratching in the leaves like a feeding turkey. It worked..... I was calling and my gun was in my lap. I look up and he had made his way past the pine tree and all I see is a beard and legs....I reach for the gun but its too late....busted. I quickly raise the gun and slid the bead on his side and squeezed the trigger. He clucks and turns to run as I fire and the shot runs right up the side of him. Complete miss at less than 10 feet. Not a single feather touched. CRAAAPP!!!!!! Good size bird...11 inch (or so) beard.

Day 5: 3:30 AM: Rain let up. Hunted alone in Brunswick. Devin and I had driven around the night before and found 4 Toms of good size and watched them go to bed. I setup the next morning....near 6 other hunters....and had the birds across a creek less than 200 hundred yards from me. They did not want to move. So I tried a stalk....to no avail. I got within 40 yards but just could not see the birds. I started to drive home and decided to run by some fields out past the house. As I drove by my neighborhood, a HUGE tom was standing by the side of the road next to someones mailbox. I drove by him and he crossed the road. I turned around and drove down into my neighborhood and go setup in the woods below where he went in. Called to him for about an hour and called it a day. 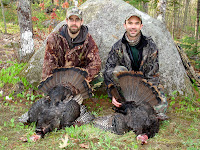 Duck man with his first ever Turkey. A double shot from Duck man's 12 and my 10 brought these two down on the opening day at the same exact time!

Day 6: Monday. Dad decided not to go and I had decided that given my work load this would be my last day. The day felt good...was confident that
Today would be the day. Had leads on 3 birds and had seen birds every day. Got up late and made my way to a spot that always seems to hold a tom at roost. Made a single hen sound from the road and he sounded off in the tree just off the main road. I went to a field below and setup. He flew down at about 5:30 AM and was very hesitant to come in. I called to him for about a half hour but he moved off and down towards the river. I picked up and left. I arrived at the corn field where I shot last years bird in time to see a hen and small tom fly down from their tree. They moved towards the only spot where I could enter the field so I decided to move on. Maybe a good spot for tomorrow if I decide to hunt. I drove to the former town landfill....same spot where I missed that huge bird last year. It is only 6:30 yet I resign myself to this being my last chance today. I walked up the old road and got to the top. Used the box call to see if anything was around and heard a jake respond back. I got setup in the field below the road. Made one call with the box call and put my mouth call in. Just as I did that I looked up to see 2 white heads running down the road at me..... One of the toms came into the field towards the decoy and I immediately id'd him as a young bird with only a 4-5 inch beard. The bigger bird stayed on the road and was flared out and posturing. His head was brilliant white and I could see he was a bigger bird than the one less than 15 feet from me near the decoy. The young bird turned towards the decoy and puffed up and gave the decoy a peck...I knew the gig was up. I took the opportunity of him looking away to move my gun and sight in on the bigger bird now 40 yards away. As soon as he was lined up...I shot the bird on the road. I immediately jumped up as I was unsure if I had hit the bird hard. 2 birds immediately took off and I thought I had missed him. I was about to shoot the second bird in the air when I heard the wing flaps my bird back on the road. Turns out there were 3 Toms coming to me...I only ever saw 2. YAHOOOOOOOOOO! 10 inch beard, 19lbs 4oz. Season over!!!!