Have you ever slowly and gingerly pulled your rifle up into a tree stand, only to let out a sigh of relief when it finally arrives safely to hand? If you have, then this posting is obviously for you. After years of searching for that silver bullet, miracle, super “string” my long journey is over and I must share my findings and introduce you to the world of the high tech gear hauler. 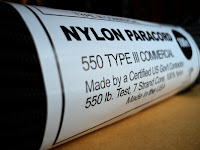 The Cadillac or perhaps better stated the Rolls-Royce of gear haulers is parachute cord. Much more than simply “string”, this kernmantle constructed dynamic rope is comprised of a 7-strand nylon core and rated with a tensile breaking strength of 550 lbs (insert male grunting here). These impressive attributes make parachute cord not only a sportsman's best friend but also tougher then the lips on a woodpecker.

Paracord is available from several different online sources and resides in every single military surplus store I have ever set foot in. For those looking to make a fashion statement or match their favorite hunting jacket, it comes in practically every color imaginable, including I believe invisible. Sportsmen not satisfied with the everyday standard 550 paracord, know commercially as type III, may invest in type IV having additional breaking strength up to a hefty 750 lbs. As if determined by divine providence, both type III and IV have enough strength to double as haul cord for pulling out a deer. Simply tie one end onto the massive rack, wrap the other end around a sturdy cut tree branch and your outta there faster than you can say hot steamin' buck seamen! 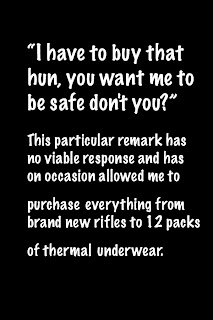 An investment of a thousand feet of parachute cord, will set you back about $45.00, providing you with enough gear hauling yardage to last until the day you die. If the spouse gives you a hard time about such an exorbitant purchase, repeat after me, “I have to buy that hun, you want me to be safe don't you?” This particular remark has no viable response and has on occasion allowed me to purchase everything from brand new rifles to 12 packs of thermal underwear. (HINT: You may want to be getting a pen and writing this down.)


Knots to Tie
In my previous life as a rock climber and mountaineer, few things were more important than good knots. Hanging a thousand feet off the ground, you must be absolutely confident the double fishermen, figure-eight, butterfly or clove hitch you just tied was done correctly and is the right knot for the intended job. Along those same lines, care must be taken to correctly tie the gear hauler first to your climbing stand and secondly to your firearm. If using a climber stand, cut cord to a length of 22 feet. This allows you to know when you have reached the desired stand height of around 20 feet and provides you enough cordage to tie the required knots. Burn any cut ends lightly with cigarette lighter to insure it won't fray. Use care to fuse the inner core with the outside sheath or they will later separate.

The combination of a figure eight and double fishermen knot is highly effective. In other words, practically zero percent chance of failure. This end will be looped over an acceptable part of your climber and pulled up to the proper height as you climb the tree. If hunting out of a permanent ladder type stand the loop can be fastened to a tree branch or stand by using either the loop or by threading the end of the rope through the loop and creating a cinch around the arm rest. The cinch is much easier to untie with cold hands than a knot.

The other end of the gear hauler is of course attached to the firearm. Depending on the type and configuration of the firearm you carry (lever gun, bolt or semi automatic action, scoped, shotgun or having a sling) it will potentially be different.  Three over hand knots, a simple square knot or figure- eight with the back-up double fisherman are all equally effective depending on the situation. My favorite for lever guns is figure- eight with the back-up double fisherman. Where the pre-tied loop is brought through the lever and looped around the barrel, NOT through the trigger hole. Scoped guns have a smaller pinch point between the scope and the barrel and may not accept the larger diameter of parachord if tied in a knot and attempting the same hook-up.

Who hasn't pulled on their gear hauler, only to find it tangled around a tree root, branch or rifle. To combat this issue, after securing your rifle to the cordage, take a few seconds to check that as the gear hauling rope neatly coiled next to and not on top of your rifle and in an area that you have cleared of debris. As the rope unfurls, the end attached to the rifle should be on the bottom and NOT the top of the pile. This will ensure that the rope is played out from top to bottom and doesn’t “birds nest”, creating a knotted mess. Another school of thought, to avoid the worry of having to deal with the potential worry of jumbled cordage, is to hang your gear hauler off a sturdy tree branch or from the side of your ladder blind. (Note: If leaving it out for months at a time be watchful for damage caused by weather, UV, mice and abrasion.)

Lastly, what should always be firstly. Be sure to ALWAYS UNLOAD YOUR FIREARM before attempting to pull it into a tree!!
Posted by Rabid Outdoorsman at 12/17/2010