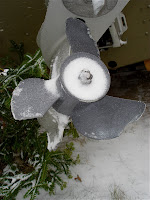 As my brother hit the throttle on the 40 HP 4 stroke Honda I could tell immediately that something was wrong. The boat began having a series of shimmies, shakes and convulsions reminiscent of an epileptic attack. Moments before in a slight mistake of judgment we had gently “tapped” a granite ledge hiding ominously a few feet under the water. As we pursued a crippled eider deeper and deeper into the bay, I contemplated the possibility of a Coast Guard rescue. Returning to the mooring buoy, we inspected the motor and found that several of the propeller blades were mangled and the entire fin on the lower unit has been sacrificed to Davy Jones’s locker. We managed to finish the morning hunt shooting a total of five eiders and then limp slowly back to the landing under half power.

A side trip on the way home to the local Honda dealership indicated that our wrestling match with King Neptune had not only caused the apparent visual damage to the prop and lower unit but had also stripped the internal bearings and partially bent the shaft; total estimated costs $1,000.00 green backs. Never one to be discouraged, my brother simply made a few calls to his insurance company and due to his forethought in setting a very low deductible he came out of the whole mess barely financially scathed.

In our “after the incident” conversations we lamented in the fact that we were as lucky as we were. A hole could have been torn in the boat, impact could have knocked someone overboard, the engine could have been inoperable or a dozen other issues could have occurred. Sometimes you have to be thankful for not having to enter into “what could have happened” and grateful for “what did happen”!
Posted by Rabid Outdoorsman at 11/24/2008