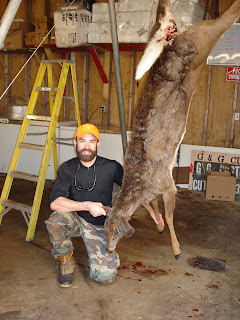 Before getting to deep in this post, I have to explain something to you and it is the fact that I consider any deer a trophy. Deer hunting in Maine is difficult to say the least and many hunters will undoubtedly go an entire season or more without even seeing a deer much less getting a chance at a shot opportunity. This combined with the fact that we are coming off one of the worst winter snow falls on recent record and any hunter filling his tag this season is an anomaly.

It was a fast deer season for me this year with completion coming on the third day of the season but it is still one that I certainly will cherish years from now. This momentous season was marked by the harvesting of deer number 10 over a course of 8 consecutive years. So far this sportsman has managed to through luck and skill (mostly luck) to keep the freezer fully stocked with venison for close to a decade.

The Story - with the light dying I could hear a deer making its way slowly up the edge of the swamp. With the southerly wind, I could fell my chances diminishing as I was in precisely the wrong position. I thought about the night before and the through washing I had given my hunting clothes in no scent soap and how I had made sure to pack them in a garbage bag filled with pine boughs. It must have given me a slight advantage because the doe crossed my shooting lane at about 100 yards. I braced my shooting arm against the tree where my climbing stand was situated and let out a fawn bleat to stop the walking doe. The deer didn't stop so I let out another MUCH louder bleat . . . still the doe didn't stop. Finally as the deer reached the outer edge of the shooting lane I took a walking shot with my 30-06 Browning BAR loaded with a deadly load of 180 grain Remingtons and the deer dropped instantly.

I always say that after the shot the hardest work remains and in this case that is so truthful it hurt. I was hunting a remote part of the property and I knew from previous years that I had at lest an hour and a half drag ahead of me. I settled into the work I had created for myself and managed to contact a neighbor with an ATV to bail me out for the final ½ hour of the drag. I arrived at the house exhausted and starving and hit a new low by eating fried chicken in the whirlpool tub . . . thus taking care of two issues at once (an aching back and rumbling tummy!). 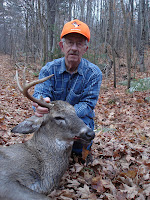 I had planned to let the deer hang a few days but noted early the next morning that flies were buzzing and the November sun especially bright. I took the deer in to tag and at the same time ran it over to the butchers. Thus far the property has managed to produce my 125 lb. doe and the included photographed 8 point buck (missing it's left side horns) shot by my neighbor. (His story is another post all to itself!) With most of the season ahead of us I am curious to see if my old man can manage at least one more whitetail . . . time will tell.
Posted by Rabid Outdoorsman at 11/06/2008