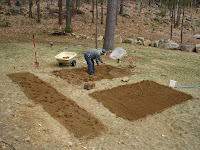 Aching muscles and joints today after managing to dig several sizable holes in my lawn this past weekend. I was seriously shown up by my 74 year old Portuguese father in law who showed me that men aren't built like they used to be. After six hours of using a heavy hoe to remove the sob and loosen the soil he was still going strong while I was ready to take a nap.

I decided to incorporate a few considerations when I designed the garden using something I read about called the "French Technique". The basic idea is to create access paths and really focus on planting crops in rotation and close together to discourage weed growth. Well, will have ot see how it works.

As I watched the sun streak across the sky yesterday afternoon I was somewhat disappointed that my plots did not appear to be getting as much sun as I had originally envisioned. Well, this year is my grand experiment with my green thumb so I guess I will have to just wait and see.

Next on the list is adding some loam and compost next weekend and getting seedling trays and seeds ordered!
Posted by Rabid Outdoorsman at 4/13/2009