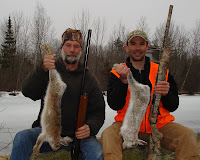 I feel as of late, I have dropped off the blogging face of the world. Have been frantic on a couple of projects around the house and work that have monopolized most of my time. Well, I guess I can't complain I am one of those personalities that loves to be busy! The following is a story I have been trying to complete for well over a week now but just can't seem to get it going much beyond the beginning stages . . .

As the phone rang on Friday evening I was rather hopeful that it would be a call from my next-door neighbor asking if I wanted to pursue bunnies for the final time before the season closed. Never one to disappoint, I heard his gruff old voice on the other end of the line . . . “Hey you wanna hunt Wabbits tomorrow morning?”. Of course my immediate reply was a barely contained affirmative.

Arriving around 7:30 the next morning I was pleased that the nightly blanket of cloud cover had managed to keep the morning temperatures at a descent level that would allow me to hunt with a light form fitting jacket. Earlier in the season I had missed a rabbit when the butt end of my stock caught on my bulky winter jacket. The low lying clouds also blocked a majority of the rising morning sun keeping down the glare off the snow.

As we crept through the thick brush with slow deliberate movements it didn’t take long for the bunnies to panic and to start running. Hunting rabbits without a dog isn’t the most perfect scenario but it can be a ton of fun. Within an hour and a half we managed to take two nice rabbits and enjoy the last day of the 08-09 rabbit season.

For more on hunting rabbits see:
Hunting the Snowshoe Hare
Rabbit Hunting Without Dogs
Posted by Rabid Outdoorsman at 4/09/2009