Home, Home on the Range 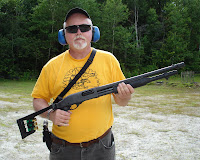 In preparation of the upcoming hunting seasons, I decided last week that the time had finally arrived to invest a few hours on the range. The plan was simple, I was going to sight in my rifles to insure that they were still producing accurate groups. Despite the fact that I have had most of these firearms since birth, it never hurts to throw a few rounds down range from various positions to test your form and re-build confidence at various distances. After all the most accurate firearm you own is the one you shoot most often . . . right? 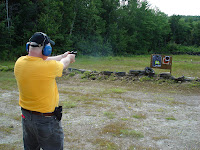 Well, as all plans go there was a slight glitch and in this case the glitch was my friend Buzz. Buzz is a firearm fanatic who enjoys going to the range and letting the lead fly. Seriously, who can blame him actually? What is more intoxicating than the aroma of gunpowder on a lazy summer evening. Where my efforts center more on hunting rather than the "home defense" realm, I was quickly pulled into the use of his 870 12 gauge "Door Knocker" and assortment of small but capable handguns. As I fired shot after shot of buckshot and .38 special rounds into "bones" the skeleton wielding a knife target that Buzz had brought I began visualizing my next firearm purchase. I am thinking that nothing says "home defense" quite like a Bushmaster AR15 in .223 plus what a great varmint gun! Funny what you can justify when under the influence of adrenaline.

So a reminder to all of you get out to the range! Bear and Goose season are weeks away and if you aren't into hunting dust off that "home defense" weapon and put a few down range. Remember, nothing says preparation like practice! Good Luck and Good Shooting!
Posted by Rabid Outdoorsman at 8/19/2009

Email ThisBlogThis!Share to TwitterShare to FacebookShare to Pinterest
Labels: Home on the Range, Target Practice