The Maine Sportsman - New England's Largest Outdoor Publication – Will be publishing my 5th story in their September 2009 edition (Pg. 21-23). The article will be part of the magazines “special sections” and highlight hunting with the single shot rifle. For more information on the Maine Sportsman Magazine or to order a subscription click this link: http://mainesportsman.comm. The copy below is the originally submitted unedited version. Enjoy!

Hunting with the Single-Shot Rifle
By Steve Vose
Shooting Sports Article
September Issue - Due May 1, 2008

While conducting the end of the season annual inspection and cleaning regiment on the well used firearms inside my gun cabinet, I noted the small New England Firearms single shot .410 bore sitting in the corner. Picking up the very first firearm I had ever owned, an outpouring of memories washed over me. My mind raced with visions of that little beauty and I chasing rabbits through spruce thickets, flushing grouse out of old farm orchards and eliminating most of the red squirrel population in Washington County. Over the years several more firearms were added to my collection but none having a more special place in my heart than that old break action .410. Thinking more about those youthful and happy memories, I began to contemplate adding another single shot firearm to my collection. 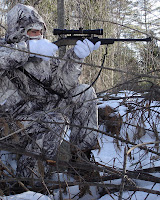 Choosing a Configuration
A web search quickly presented me with a number of single shot rifle options. Most notably Ruger’s Number One and T/C Contender/Encore line which dominate the higher end of the single shot consumer grade market. Costing upwards of $800 these options were outside of my price range. It was at this time I heard that Marlin working in conjunction with newly acquired Harrington and Richardson and New England Firearms, were selling an entry level single shot for around $300 with used models at less than $200.

Thumbing through the H&R and NEF Sporting Firearms catalog will leave gun nuts drooling. Depicted within are an impressive collection of shotguns and rifles available in a variety of calibers and configurations. In shotguns .410 bore to 10 gauge and in rifles a dizzying array of center fire calibers in addition to the .17 HMR and assorted .22 rim fire options. Configurations immediately catching my eye included their quirky Survivor and Tamer line, Ultra Varmint rifles, stainless and superlight options. Being more of a traditionalist, I finally settled on the fine lines and craftsmanship evident in the Handi-Rifle (SB2) with walnut stock.

In the market for an extended range varmint gun that could double as an effective introductory deer rifle for my sons had me choosing the .243 Winchester. For those unfamiliar with this caliber it is fully capable of dispatching everything from woodchucks and coyotes to larger deer size animals.

The charted ballistics behind the .243 Winchester depict an energy packed, flat shooting round capable of producing approximately 1629 foot pounds of energy at 100 yards and a velocity of 2709 feet per second with the Remington Core-Lokt Ultra 100 grain loads. For distance shooting the Premier Accutip 75 gain loads are dead on at 150 yards, 0.4 inches high at 100 and 7.8 low at 300 yards.

Optics
I have been so impressed with the Handi-Rifles that I now own two in .243 Winchester caliber. As an experiment to test the sight quality and target acquisition between differing scopes I outfitted the two rifles with optics from both ends of the budgetary spectrum.

On the range at 100 yards during the full light of day there is little difference in the shooting performance achieved between the two optical selections. Even in the low light conditions encountered when night hunting coyotes I have found that the Tasco scope is fully capable when used under the light of a full moon. Where the Leupold VXII optics are impressive are during periods of extreme low light and inclement weather.

Hunting coyotes one frosty winter night heavily clouded skies and a waning crescent moon barely illuminated the surface of the frozen lake. As large fat flakes of snow began to fall the familiar silhouette of a coyote slipped silently down the edge of the lake. Slowly raising my rifle and peering through the Leupold scope I was not surprised to find a clear, crisp image. These are the types of instances where the superior light gathering and durable Leupold optics reign supreme against more budget conscious options.

Choosing a CaliberOn the Range
Ballistic charts are great but the target range provides a great proving ground where the effectiveness of a newly acquired firearm can be thoroughly tested. Firing 100 grain Remington Core-Lokt from a prone position I was able to produce 2 inch groups at 100 yards, not impressive but enough short range accuracy for most hunting applications. Ammo for the .243 Winchester is commonly carried by the smallest to the largest sports shops with the 100 and 80 grain most common. A trip to the range with the “cheap” stuff will set you back about $18.00 a box. Other performance loads can be special ordered and dozens of reloading options are available.

Increasing Accuracy
With little additional investment, sportsmen requiring a higher degree of accuracy can take a few simple steps to get their Handi-Rifle pulling tighter groups.

Any new and especially used firearm should be thoroughly cleaned before attempting to center small groups. Soaking a patch in Hoppe’s #9 and scrubbing the inside of the barrel for 7-10 strokes accomplish this. Finish with two additional patches soaked in Hoppe’s #9 and lastly two dry patches. Repeat this process every 30-40 rounds.

Upgrading to higher quality ammo such as the Winchester Supreme 95 grain ballistic silver tips and other equivalents in the 80-95 grain weights tightened the 100 yard groups by approximately half an inch. Paying over twice as much more per box for this increase in accuracy will be to the benefit of all sportsmen but especially helpful in long distance situations where every ounce of accuracy counts.

The rough triggers on both rifles pull at around five pounds. Shooters looking for more accuracy should consider having a gunsmith take the trigger down to between two to three pounds. H&R will do the work for a minimal charge if you send them the gun and pay shipping charges. Another less obtrusive option is to invest in a trigger shoe. This small device fits over the top of the trigger and allows your finger a broader surface on which to rest, leading to a more even and lighter feeling pull.

Reducing vibration in the barrel can also achieve additional accuracy. This is accomplished by adding a small rubber washer between the barrel and the front hand guard or forend. Separate the front forend from the barrel by losing the attachment screw. Purchase at a local hardware store a large flat rubber washer between 1/16" to 1/8" thick. Trim the washer as necessary and slide over the hanger lug fitting it between the barrel and the forend. Finish by lightly tightening the entire assembly back to its original position. 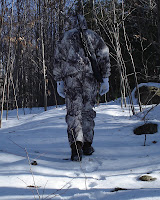 Hunting with the Single Shot
Due to the break action and transfer bar safety systems the Handi-rifles are a great firearm for beginners. The break action make it easy to visually insure the firearm is unloaded and the transfer bar system does not allow the hammer to connect with the firing pin unless the trigger is fully depressed. For seasoned sportsman the single shot requires careful shot placement offering the challenge of making one shot count.

Slinging the single shot over my shoulder, I barely register its weight. This makes it perfect for extended snowshoe hikes into the backcountry chasing coyotes or stalking whitetails. It’s compact design makes for quick handling facilitating hunting from the close quarters of a ground blind. The simplistic nature of the single shot makes it easy to maintain in adverse weather conditions or situations were it might receive heavy handling.

Shooting enthusiasts looking for a supreme level of accuracy will want to explore the possibility of purchasing one of the more expensive Ruger and T/C rifles. Hunters looking to acquire a capable field rifle or entry level gun for a new or young shooter the Handi-Rifle is an excellent choice.

Final Word
When purchasing a new or used firearm the buyer should beware and make sure to thoroughly inspect its condition to insure effective operation. Some large corporate dealers, like Cabelas, consider all firearm sales final and do not offer returns on any firearms. Other dealers like L.L. Bean offer a lifetime satisfaction guarantee on their entire selection of new and used firearms. Sitting in the middle Kittery Trading Post offers a 30 day return on used firearms and aggressively works with the consumer to insure satisfaction with new firearm purchases. Bottom line, it pays to shop around and pay attention to the fine print.

With any new firearm there is a learning curve associated with its safe operation. Make sure to take a few moments reading the literature provided with the firearm or if unavailable (such as is often the case with the purchase of a secondhand firearm) download the owners manual from the Internet or request a copy from the manufacturer.
Posted by Rabid Outdoorsman at 8/27/2009