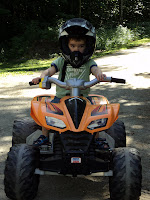 The rains poured down from the heavens, like God was attempting to drown the entire citizenry of Maine. While the weather forecast had called for on and off showers, dark menacing clouds showed no signs of breakage. Typically such wet weather, would mean nothing to me and on many occasions, I have been exposed too much, much worse. Today, however, my concerns were focused on my four year old son, standing beside me, and what he was thinking, as I prepared to take him on his first ever extended ATV trip. Swathed from head to toe in water repellent vinyl, topped with a helmet and wearing his new goggles he looked so grown-up that he reminded me of a miniaturized version of a man. I looked at my watch and it read 11:15 AM and I knew that if I was to make this outing “fun” and henceforth successful, I needed to insure the trip be no longer than two hours. With anybody from kids to adults, it is critical that their first outdoor experiences be built on happy fond memories. Nothing will destroy a person’s interest and passion in the outdoors faster than having those first times afield spoiled by a negative happenstance. While nobody can control the weather, there are dozens of other things that you can do to insure your kids, family, friends and “sports” have a great time.

I knew of my little one, that being warm and dry were utmost importance, then food and drink and finally the quality of the trail we were riding. Bumpy, challenging trails with frequent stop starts are hard on backs and necks (when little heads wear heavy helmets) and can quickly become scary for youngsters. Being unfamiliar with this particular trail system, I learned from the outset that slow speeds would be necessary, if we were going to make it two hours. Rough trail conditions, made more challenging by two days of heavy rain, had the little one asking to return to the “ATV club house” after an hour. On the return trip, I could see his resolve slowly fading but promises of pizza and chocolate milk soon brought back that huge smile that everyday fills my heart with joy.

By no means was I discouraged in having to turn around early, on the contrary, I was extremely pleased that he had held out that long, in such challenging conditions. Later this summer, we have an extended multi-day ATV/camping trip planned and this initial foray was precisely what was needed to prepare him for the longer trip.
Posted by Rabid Outdoorsman at 7/27/2010