Under increasingly threatening skies and against every ounce of better judgment, Mr. President and I grabbed our fishing poles and headed out for No Name Pond.  With fall color creeping into the landscape, a late season foray into the world of the local large mouthed bass fishery had me less than hopeful. Tempering my pessimistic thoughts, however, was a wildly grinning and infectiously enthusiastic Mr. President. He explained that the bass were hungry and tired from their long summer days of hanging in tepid waters and would be voracious this time of year as the waters cooled, the approaching fall days signaling primal urges in their bellies. Somehow, the exulted leader of “Duck Power Incorporated”, seemingly always possess the ability to elicit confidence, in even the most dire of situations.

As small droplets of rain began ricocheting off the fenders of the ATV, I hit the throttle and we screamed off into the quickly deteriorating weather forecast. Arriving at the pond, I gradually flipped over the old canoe, first warning Mr. President that often paper wasps found the underside of the canoe a hard to resist spot for building lakeside vacation homes. We both let out a sigh of relief, finding that no stinging, winged avengers were present.

Gently entering the ancient watercraft, it creaked and moaned like an old man trying to get out of bed in the morning. Constructed of slowly deteriorating fiberglass and with more patches than my Grandfathers old hunting coat, the old girl was in need of a vast amount of TLC. Suffering from approximately four decades of abuse, by various means of outdoor debauchery, water leaked through the floorboards at a constant and regular rate.

Not to be discouraged, by neither the rain entering our faulty craft from above nor the water seeping in from below, was the venerable Mr. President. While lesser men may have crumbled in such dreary conditions, Mr. President only flashed that Jack O’ Lantern sized smile, that despite the heavy cloud cover, had me squinting so hard you could have blindfolded me with dental floss.

Unawares was I, Mr. President had come equipped, for this endeavor, with a selection of bass enticing lures certain to leave the bronze backs unable to maintain a single ounce of composure. I struggled not to take offense, as Mr. President almost collapsed in the bottom of the canoe, at my suggestion of using a Frog Jitter Bug and he scoffed loudly at my usage of a six-inch minnow imitation Rapala.

Mr. President confidently tied on a ZOOM Super fluke and landed three fish in as many casts. Watching his artful fishing display, I became consciously aware that my mouth was hanging open and I was drooling, Finally regaining composure, I asked if perhaps he might have another of those fancy lures. Cutting his line and handing over the secret weapon, I have to admit I was somewhat astonished. While it certainly is within Mr. President’s nature to be a “gift full” individual, it is not typically in his nature to pass up an opportunity to shamelessly badger his opponent. 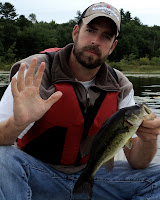 Bracing myself for the anticipated onslaught of comments, Mr. President instead began to calmly peruse his collection of lures.  After several decisive minutes of reviewing various candidates, he finally decided on using a “Terminator” spinner bait. As if it was even possible to catch fish at an even exponentially faster rate, I sat in disbelieving angst. Fast forward one hour and I was shamelessly begging Mr. President for the “Terminator”. Again brashly cutting his line, he handed over secret weapon #2 and quickly switched to ripping up the waters with a “Blue Fox”, now seemingly on a mission to search and destroy. Mr. President fiendishly worked the flats and structure in an all out effort to break his all time single day catch record. Despite my best efforts to throw him off his game, by eliciting subtraction penalties from the many pickerel and perch caught, his numbers kept adding up. As the sun began to sink low, the President, nursing an aching wrist and heavily growling stomach, boated his fiftieth large mouth bass of the day.

I suppose somewhere in this sorted excursion, I should mention that during this wild tale of fishing excellence, Mr. President additionally managed to boat what he described as the second biggest large mouth bass of his life. Being an ex-tournament bass fisherman, this is an extraordinary task, to not only beat his all time daily record but also be so close to beating his all time bass fishing size record. Though I can take no kudos for the ultimate fishing display, by Mr. President, I do take great satisfaction in the fact that I chose our fishing location and was there to enjoy his through trouncing of his previous fishing record. I figure, as my gym teacher always told me in High School, if you can’t be an athlete be an athletic supporter. Congrats Buddy!