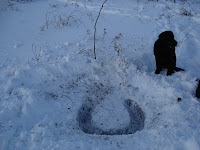 Maybe I have flair for the melodramatic but then again isn’t that a trait shared by all writers? Enjoy!

In an epic early morning battle pitting man against nature, I was sorely defeated. Seemly well equipped with my grandfather‘s (Pup) razor sharp ice chipping spud my expectations were running high as I trudged into the woodlands and braved the wide gaping maw of Mother Nature with her claws made of icicles and teeth of rime ice.

Unfortunately the brutally cold early morning temps dipping into the negative digits made the chipping akin to attempting to hammer through concrete with a butter knife. While my torso was quickly a wash of sweat from my rhythmic thrashing and hammering my extremities were soon suffering. After about one and a half hours I had frozen fingers and toes and a Labrador that could easily be categorized as a pupsicle.

I knew I was finally done when a misplaced chip from the spud sliced through one of the brow tines causing minor damage but enough to encourage me to come back and challenge the ice another day.

Eight to twelve inches of snow are expected tomorrow so I marked the site as best I could considering the stark barren featureless nothingness that is a snow swept lake and have vowed to return!
Posted by Rabid Outdoorsman at 1/27/2009