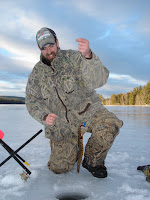 As the sun crept slowly across the horizon and the temperature began to drop, I began to question if we would catch anything. We were fishing a shallow cove within spitting distance of the boat landing. Gazing out across the dozens of old ice holes dotting the lakes icy surface, I began to question my judgment. Could it be possible that due to its proximity to the boat launch the cove had effectively been “fished out”? As I pondered this thought, my concerns were momentarily directed toward the shifting wind, now forcing a considerable frigid breeze onto our position. Perhaps our increased discomfort would signal the fish to bite?!?! 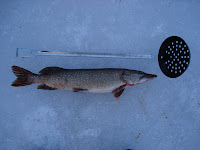 Turning an eye toward Mr. President, I noted that he was getting out of his chair for the 3rd time in an hour to go and re-check his baits. Somehow an off hand comment slipped from my lips referring to him being a Master Baiter. In response, I received a disappointing look and a statement to the fact that lazy drunks who sit in their chairs all day never catch fish. At this point, I had just enough liquid courage in my system to refute this fact and specifically state the multiple occasions where the drunkest of the bunch had managed to catch exquisite fish specimens. As my brain began its digressions into the data behind previous successful fishing expeditions and the proportional high consumption of alcohol, I could quickly see Mr. President’s was completely unimpressed with my analysis.

It was at this point, that Mr. President yelled out an excited flag! I immediately noted that my furthest tip-up had sprung! Racing across the slippery surface my life flashed before my eyes on several occasions. Running 200 yards across a frozen lake has the same heart accelerating moments, as leaning back in a chair several dozen times and barely catching yourself from a bad fall. 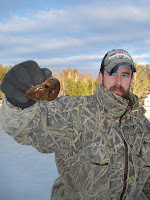 Approaching the hole, I was please to see that the line was spooling off with authority, and then suddenly it stopped. Impatiently I waited to see if it would start moving again and minutes later the line again began its speedy descent to Davey Jones Locker. Upon removing the tip-up from the hole, a roster tail of spray erupted off the reel and I knew that I had hooked a pike. Gently setting the number 6 hook, I cautiously started to haul in the small gator. Even a small pike, could snap my 12 lb mono with its toothy mouth should I not be careful. Moments later I could see the pikes familiar snakelike shape swim by the hole and in one quick motion; I swung the fish up, through the hole and onto the ice. The 24-inch Northern Pike had managed to completely swallow my hook and a 5-inch dead smelt, I was using for bait, almost to its butt hole. Rather than risk losing a digit, I simply cut and retied a new leader. Experience from previous encounters with these finger shredders, had taught me to be respectful. Even in death these toothy creatures can inflict serious wounds.

After managing some pictures and high fives we retired back to the comforts of the shoreline and the warmth of a small campfire. Lunch was provided in the form of red hotdogs (a Maine ice fishing favorite). There is something about mystery meat and red dye number 7, slow roasted over the coals of the campfire, that make me want to flop down on the ice and shake my leg like a dog. It is almost to good to describe in words, that meaty charcoal flavor that is only accentuated by eating it off a stick in the great outdoors. 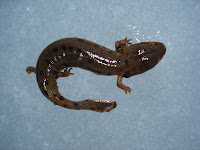 Of course leave it to Mr. President to get a flag right in the middle of my good time. Barely had that first succulent log of mechanically separated animal "parts" passed by my lips when he was off like a man shot from a cannon. His excited screams echoed across the lake, reminding me of a time when I threw a frog in with my Mom while she was in the shower. Racing off behind him, I readied my camera for his first “Pike” encounter. As I approached the hole, I could hear his shouting above the wind that he could see the Pike swimming back and forth in the shallow water. Odd I thought. Frantically pulling up on the line, his face twisted into a strange perverse shape and I knew that something had gone dreadfully wrong. Instead of a Pike Mr. President had procured the BIGGEST Mud Puppy I have ever seen.

Despite my multiple (taunts) suggestions, that he submit it to an official set of scales, to be added to the state record books, instead the slippery critter managed to find a new home in one of MY ice fishing holes . . . touché Mr. President touché.