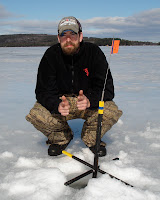 Pacing nervously back and forth on my front door step, I began to grow impatient at Mr. President for being an annoying and irritating “on time”. What he had failed to grasp was the simple fact, that when he is operating on my dime the expectation is that he be early. Upon his arrival, I attempted to explain to him the complexities of the situation and how his discourteous nature had caused me undue anxiety. He simply ignored my comments and mumbled something about gutting me like a fish, if I didn’t quit bellyaching. He added that there would be additional pain administered, if I did not take him to a spot where we need to use his 4-wheeler. Apparently, after transporting the “Big Bear” in the back of his truck over and through 300 miles of black ice, frost heaves and tornadoes any misstep on my part not to include the wheeled transport in our fishing activities would be met with dismemberment. I informed him that in fact, he was “lucky” since today we would be fishing on foot BUT that tomorrow the 4-wheeler would prove to be a valuable asset, as we explored N. Pike waters in the remote corners of Great Pond. To this comment, I received a favorable grunt of acceptance and relief that I would not be seeing my lower intestines anytime soon. 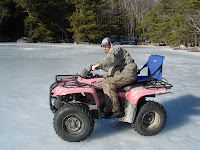 Loading our gear into my truck, I noted that Mr. President had decided to bring his ice auger. As he dropped it into the back of my truck, I asked if it was operating at peak efficiency? Mr. President replied with a sarcastic “Well, it wouldn’t be worth bringing if it wasn’t.” Marveling at his logic and my stupidity, I decided to go for Olympic gold and ask an even more foolish question. So, Mr. President does that auger have any gas in it? With a grunt and a smirk, I received a “Some, should be enough to drill a few holes”.

At the completion of this witty retort, we were in the truck and heading to the hard water. Our intended destination, the shallow waters of Great Pond in Belgrade to target N. Pike and any other fish species foolish enough to lock horns with our fishing prowess. As we peeled out of the driveway and pointed the truck toward the interstate, AC/DC tuned away in the background. In my best big boy voice, I explained to Mr. President that while he was in MY truck there would be no Lady GaGa, JayZ, Tic Toc nonsense and that if he wanted to hear top 40 he could walk. As Mr. President pulled out his filet knife, I immediately switched the station to 97.1 WHIPHOP. 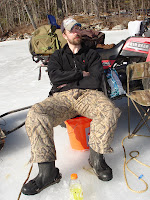 Twenty five minutes later, we pulled into the boat landing high on the anticipation of an afternoon eating good food, telling tall tales, soaking in the sun’s rays and even maybe possibly catching a fish. As we approached the edge of the lake, I was amazed to find that very little snow covered the surface. A glaring, shimmering ice field stretching as far as the eyes could see. Walking on the ice surface, in my rubber boots, I was about as coordinated as a walrus trying to play the piano. As I struggled to maintain my balance, Mr. President walked confidently across the ice with crampons fit for climbing Mt. Everest. Scoffing and insulting his preparedness, I suggested that if he was so well equipped maybe HE should drill ALL of the ice holes. To this remark, I received one of Mr. President’s patented smirks.

As I slid and tumbled across the slippery surface, I finally managed to get in my five tip-ups. In the time it took me to complete this task, Mr. President was able to drill 20 holes, set his 5 lines, jig for 30 minutes, eat a hot dog and knit a sweater. Exhausted and sweating like a pig, I finally managed to return to the shoreline and the sweet taste of traction. 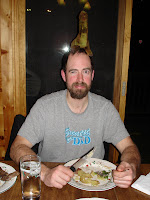 Like most afternoons, spent with Mr. President, it was filled with debauchery. He managed to tip my furthest tip-up, while I was at the truck conducting a beer run. He laughed himself almost silly as he watched me run across 300 yards of slippery ice. In payback, I poisoned him by feeding him red hotdogs until his colon threatened to slide out his anus . . . ahh, the sweetness of revenge. Unfortunately, I now have to re-paint my bathroom and buy another case of fart spray.

Next, the Court Jester manages a Northern and Mr. President wrestles a new state record from the murky depths. Also, for an alternate set of truths check out Mr. Presidents story.
Posted by Rabid Outdoorsman at 2/25/2010