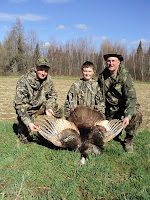 In total, five distinctly different gobbles echoed across the open cornfield, seemingly from all points of the compass. This wild crescendo of fowl vocalization excited the kiddos and made me increasingly positive about our choice of location. The gobbling commenced at 5:50 AM and continued in heated non-stop eruptions until about 6:30 AM when suddenly, not a single gobble, cluck, yelp or putt. Almost like the hand of God had slapped down onto his turkey alarm clock to cease its annoying squawking and cackling.

This transformation of once vocal to now silent birds seems to be a relatively new but increasing more frequent occurrence in the Maine hunting woods. Once on the ground, the New England turkeys really have been limiting their gobbling in recent years. I suppose it could be higher concentrations of coyotes, bobcats and turkey hunters or the arrival of yet another early spring season cutting into the breeding cycle. Whatever the cause, if you are running and gunning and want to set-up on a roosted bird you better put him to bed or arrive well before daylight.

For the boys, instead of chasing gobbling birds, we chose to hunt well know travel corridors and cut off their entry and exit into the fields where they were feeding. This tactic, to intercept them on their travels to and from roosting and feeding areas, provided a chance to set-up and wait for a turkey much like one would do when deer hunting. Though not as exciting as a spot and stalk, it does provide an added element of safety for first time hunters, by sitting them in a braced and secure location where the firearm is always pointed in a specific direction. While this may not be necessary for all young hunters, any kid that does not display a background of practiced shooting or responsible handling of their firearm should be placed in a pop-up blind and provided additional instruction in this safe environment. (I have to mention that both of the boys I guided, possessed an impressive level of skill in both shooting and handling their respective firearms a fact that always sets me at ease. A big high five to their Dad who taught them early and continued to enforce these valuable skills throughout the hunt.)

Hunting turkeys with kids is sometimes tough business. Sitting near motionless for hours without even seeing or hearing a turkey is a difficult task for even the most seasoned outdoorsman. Now throw into this mix, an excited preteen, hopped up on doughnuts and you have a bundle of convulsive, trembling action that would rival a one year old Labrador in a duck blind. Pop-up blinds increase the probability of success, by shielding movement and allowing kids to be . . . well kids. It is a common misconception that a youth is better equipped with their strong backs, stamina and vigor to have more ability to sit then an adult. Do your kid a favor and bring them a comfortable seat to sit on, after all they have less padding on their posteriors than us adults!