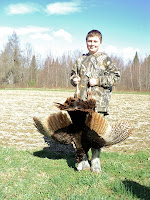 My junior client impressed me by confidently raising his 20 gauge Remington 870, slowly pulling the trigger and managing perfect shot placement from a free hand position aimed at a tom walking past the blind at 40 yards. The 15 lb 4 oz bird instantly dropped like a sack full of hammers slapped it. Nerves allowed the bird to haphazardly thrash on the ground, before the youth managed to exit the blind and pin it to the ground with a well placed foot. The youths 20 gauge had delivered a punishing payload of 3 inch #4 lead shot to the birds neck and head, instantly dispatching the animal. Sportsmen carrying 12 and 10 gauge firearms are often prone to missed shots at the same ranges, so the youth ability to know his shotguns limits and capabilities showed well his practice and skill with the firearm.

With both youth and adult hunters, new to hunting, there is always a question in my mind related to how they will handle the after the shot workload. It is one thing to shoot an animal from a distance, it is an entirely different thing to butcher and process any critter. I remember even my own reservations about this process, arising despite years of experience butchering deer, bear, hogs and other large game animals. It happened after shooting my first moose and the act of having to fit almost my entire head into the body cavity to complete some of the more involved field dressing left even this “practiced” outdoorsman slightly queasy. Considering that even the most hardened stomachs can sometimes falter during these endeavors, it is not surprising that other less proficient sportsman might struggle with certain parts of the butchering process. I am therefore always thoughtful and careful to judge how much clients wish to be involved in this process, always playing to their level of interest and skill.

In this particular scenario and with these young fellows, I quickly left any reservations at rest and watched in amazement as the youngest boy un-sheathed a knife that would make Rambo salivate and tore into the turkey like it was a science experiment. His every knife stroke carefully dissecting every organ, feather and muscle group like he was trying to obtain a noble prize in biology. I was surprised but also impressed by his vigor. All that was eventually discarded from the harvested bird were a few feathers, 10 feet of small intestine and the remains of a carefully examined gizzard. The boy was intoxicated with the prospects of "turkey" and wasn't willing to waste a single edible morsel or souvenir. Meat to eat deep fat fried, in turkey salad sandwiches and wings, tail feathers, spurs, beard, expended shell, tag and even wish bone all to be part of a permanent display in the recesses of his adolescent bedroom.

The story for these boys ends for the spring turkey season but they have already vowed to return for next spring season!
Posted by Rabid Outdoorsman at 5/16/2011