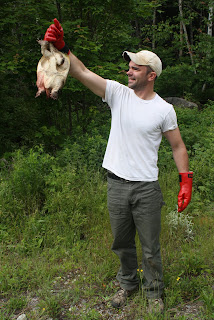 Turtle meat is somewhat tough so it is best to parboil it for an hour or so before planning to incorporate it into any recipe. One of the favorite methods of preparing is including the delicate bits in a soup. In our “experiment”, the turtle parts were boiled and then allowed to cool. The bones were picked of meat and placed in a shallow casserole dish then lightly sprinkled with pineapple chunks and a small handful of diced summer sausage. The end result was predictably as described in most of the literature, I had read on eating snapping turtle, with different parts of the turtle having unique tastes. Perhaps my favorite was the white, rubbery neck meat with a texture and taste similar to lobster. Also, the dark leg meat was what you would expect were it possible to combine beef with chicken . . . Bicken perhaps?

All in all an enjoyable eating experience, albeit a tough sell among the rest of the tribe. While everyone was willing to “try” a small morsel of the final meal, few were wiling to make the commitment to fill their plate with this delectable. It appeared that, try as I might, some of the preconceived notions and ideals about what food should look and taste like were difficult for some individuals to overcome. In the land of plenty, the snapping turtle has no worry about becoming extinct due to overharvesting. 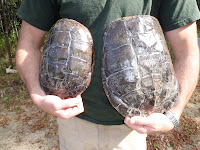 Preserving the Turtle Shells
The shells of the two turtles we harvested were gorgeous. In order to preserve them correctly, a fair amount of work had to be done to make sure that the connective cartilage between the turtles plates did not decompose and cause the shell to crumble. Of prime importance was the removal from the shell of all flesh. This was done initially during the cleaning process and repeated in more details once the shell were allowed to dry in the sun for a few days. The beef jerky texture of the flesh that remained was easy to scrape out of the shells with a sharp knife. Next the shells were washed in soap and scrubbed with Comet cleaner to help remove the dried on algae. If we had things to do over again this step would have been done before the drying as the algae would have been easier to remove. Lastly, the shells were again set aside to dry and we dusted a good heap of Borax into each. After about a week of drying in a cool dry spot the shells were ready to begin accepting their coats of lacquer. About 8 coats provided a beautiful “wet” look to the shells and preserved them for future mounting on the wall of the man cave.