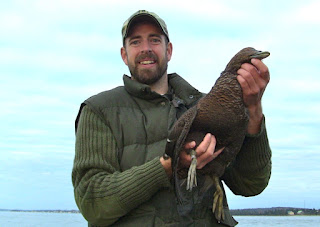 As I slowly leveled my shotgun and began tracking the unsuspecting hen eider flying across the horizon, a fragment of choked back laughter and the quick shuffle of feet momentarily distracted me. Before I could react to the disturbance, a single round of 12 gauge shot blasted forth from Mr. President’s Mossberg shotgun. As I attempted to recover from this erratic, unscheduled breach of shooting etiquette, I watched as the duck I had been tracking nose dived into the salty brine of the Atlantic. As we motored to retrieve the downed duck, I attempted to comprehend what I had done to the President to deserve such an underhanded, back stabling action, my brother said forth the following, “Steve that bird El President stole from you has a band.”

At that moment, a torrent of obscenities burst forth from my mouth, in such a powerful onslaught of vulgarity that they threatened to capsize the boat. You might say I was possessed, seeming unable to control the 4 letter words as they spewed from the dark recesses of my soul, in a display so sinister they even made my brother and Mr. President blush.

That is until that sad day.
When he stole my duck away.

Because his heart is as dark as a Cylons.
--------------------------------
It is truly amazing the power words have in lifting a person’s spirits. Now that I have worked my way through the various stages of pain and suffering, I begin to see why I make my trips to Beal’s Island only once every 4-5 years. I suppose this event is Mr. Presidents way of getting me back for not shooting that Wood Duck this season or perhaps the yearly pike fishing fiascos, either way revenge is sweet my friend . . . revenge is sweet.

For more on this sorted tale and another poem dealing with the debauchery from Mr. President’s perspective, please see “Ode to Ye Friend Rabid”.
Posted by Rabid Outdoorsman at 11/10/2011