Rabid Outdoorsman Interview on the BIRDIST

The following is a recent interview I was asked to participate in by Nick Lund of the Birdist Blog. More on this blog at the following URL. http://birdist.blogspot.com/

When did you start bird hunting? What birds do you currently hunt?

I suppose mine is a classic tale of being introduced into hunting from a very young age. First following along behind Dad as he hunted for grouse and woodcock and then progressing to using a BB gun to learn proper gun handling techniques. As I aged, I progressed to more powerful gauge firearms and finally began going out on my own by the age of 14. In my current phase of hunting, I have incorporated the use of a dog that adds an entirely new level of hunting enjoyment. Not only is she a loving and faithful companion but she also aids in the discovery and recovery of game. I currently hunt or have hunted all legal game birds.

Were you interested in birds before you started hunting them, or did hunting lead you to birds?
I have always been interested in all animals big and small. I remember as a kid my brother and I had an old TV that was gutted and fitted with a Plexiglas front that we filled with bird nests, animal skulls and small fake birds we would buy in craft stores. Hunting to me is another outlet used for enjoying the outdoors as much as the other pursuits I enjoy such as fishing, rock climbing/mountaineering, photography, hiking or kayaking.

Can you briefly describe some different hunting techniques for hunting different birds? 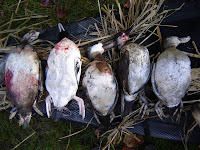 Volumes of books have been written concerning this question. A majority of the fun associated with hunting is that you are constantly trying to outsmart the game animals you are pursuing. I currently hunt turkeys, grouse, snipe, woodcock, sea and puddle ducks. Each of these endeavors requires a completely different skill set. Just hunting turkey will vary in technique depending if it is spring or fall, hunted with bow or gun, from a blind or by actively stalking. If there is one “technique” that not enough hunters understand it is that one must thoroughly scout outside of hunting seasons to determine where game animals are in the highest densities. Unfortunately most hunters do not invest enough time in this most critical of steps and seriously negatively impacts their success rate.

What is the process in Maine for someone to become a bird hunter?
An individual who wishes to begin bird hunting should first take a “Hunter Safety Course”. Bottom line is that attendance at these now mandatory courses have saved countless lives since their inception. Interested individuals should also hunt for their intended species with a licensed Maine guide or a competent and safe hunting companion that knows how to successfully hunt for that game animal. Scheduled youth hunting days are also a great option for kids under 16 as they allow kids to hunt in the woods during periods of time when adults are unable. In theory this allows game animals to be much more plentiful, available and less pressured.

What does a hunter do with his killed birds? If he eats them, does he eat ALL of them? 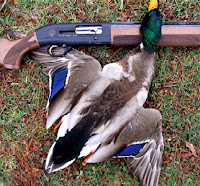 Ethically killing for the sake of killing is not hunting. For many individuals outside of the hunting world I think this is an extremely difficult concept to grasp. Hunting is much more than pulling a trigger it is about an individuals primal connection back to the woods and waters as a source of sustenance that dates back a million years. Legally Maine has a “Wanton Waste” law that requires hunters to consume all reasonable parts of every game animal. Additionally, hunters legally can only be in possession of a certain number of game birds (same as daily bag limit) so they must be immediately eaten. Aside from the “law” a good hunter has an obligation to eat what he kills.

The tastes are unique and varied with every species having different and unique textures, tastes and aromas. As an “outdoor” chef you need to maximize the positives and minimize the negatives. Obviously some species are more desirable to eat than others. Sea ducks and mergansers (fish and mussel eaters) are at the low end while wood ducks (acorn eaters) and teal are at the higher end.

I personally have different recipes for every different game animal depending on its specific culinary qualities. Turkey is typically deep fried in peanut oil, sea ducks and mergansers are combined with pork and beef and made into sausage links that I then hickory smoke, grouse are slow cooked in a dutch oven with bacon and baked beans over the coals of a campfire and puddle ducks are plucked and roasted with apple or honey glaze.

Do you ever run into birders while you're hunting? What do you see as the differences between birders and bird-hunters, and what do you think about those differences?
Sadly, I rarely see others out and enjoying the great outdoors like I have seen in decades past. It is unfortunate that a high percentage of kids these days do not seem connected with the outdoor like they used to. If you get a chance read “Last Child in the Woods” by Louv it is a wake-up call.

There are many similarities; both sets of individuals are “hunters” one group simply uses a camera and the other a gun. Both are serious about their respective sports and both are searching for opportunities to experience nature and the great outdoors in their own unique way. Unfortunately, both groups also have individuals that poorly represent their peers. I have meet inconsiderate hunters in the woods and I have also met inconsiderate nature watchers.

Do you ever feel guilty for killing birds? 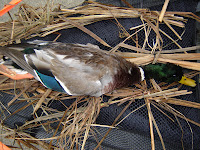 If anyone says that while hunting they are never disturbed or “guilty” I would wonder if they are telling the whole truth. No ethical hunter ever wants an animal to suffer needlessly, however, there is nothing “planned” or “perfect” in the hunting world. Whether I get my steak wrapped in plastic and resting on Styrofoam from a slaughterhouse or direct from nature something ultimately had to die for me to eat it and no matter how you cut it this is not a “pretty” process. Eventually, if you hunt long enough something will disturb you and it is how you handle this pressure as a human being that will ultimately determine how and if you develop as a hunter.

What was your most memorable bird hunt?
I literally have gigs of photos and video from different bird hunts from present back several decades. Certainly tops on my list are times spent hunting with family. I remember back in 2001 hunting with my brother for 4 days in Washington County on a productive grouse hunting trip. The weather was beautiful and the birds plentiful but even more importantly was the quality time I was able to spend with my brother. Hunting is only about 10% about pulling the trigger the other 90% is about the family and friends you spend quality time with and the memories shared.
Posted by Rabid Outdoorsman at 9/29/2008