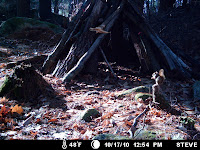 After years of consideration, I finally broke down and purchased a game camera. I honestly don’t know why I waited so long; perhaps part of me felt it created an unfair advantage in hunting situations. Throughout my outdoor sporting career, I have always strived to rely less on technology and more on skill and applied knowledge. Map and compass are used over GPS, mouth blown calls over electronic game calls, iron sights over scopes and tracking and scouting over using trail cameras. As I have aged and finding I have less and less time, in each case the previous have slowly been replaced by the more technologically advanced means. So, I guess my move to get a game camera was just a natural progression. 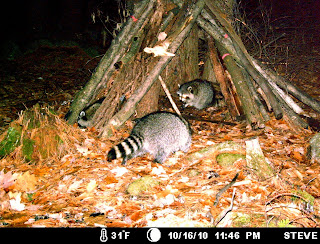 It is funny that I wouldn’t think twice about using a fish finder to help in locating salmon, togue or schooling perch but using that type of technology to locate animals seemed “unsporting”. I know that many hardcore sportsmen scoff at the idea of game cameras but I have to share a little secret and that is they are ultra cool. I have only had my camera for less than a week and I am already addicted to it. Currently, I have my camera positioned on a cubby set that contains bait. I am hopeful that in the next few days the set-up will yield a picture of a bobcat that I know has been stalking through the area. Once I get the general hang of using its various functions, I will move it to other areas that I have been interested in monitoring for deer movements. 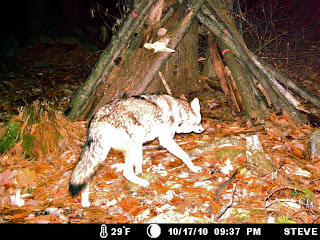 Perhaps most exciting is that this technology is an excellent entry point to get kids interested in the outdoors. Kids can not only be involved in the review of the captured photos and the identification of the various animals but also in finding areas to set-up the cameras for maximum returns of 4 legged critters. It would be a fascinating educational project for kids to undertake building their own cameras, trail timers, etc. and using them to track and monitor deer movements.

The internal memory that comes with the camera is a joke. Buy a 4Gig SD or SDHC Card for it immediately. They only cost $13.00 at Sam’s club and will hold over 4000 pictures. I bought two so that when I hike out to check the camera, I pop in the empty card and take the used one back home to read on my computer. If your computer doesn’t have a build in SD reader (like my Macbook) WalMart for $9.00 sell a SD card reader that works with your USB drive. I tried it with my memory cards and it works great! Having the extra memory also means you can set your camera to take enhanced level photos and high-resolution video with no worries about running out of storage space.

Moultire Game Cameras maintains a blog that can be found here: http://growthehunt.typepad.com/grow_the_hunt/
Posted by Rabid Outdoorsman at 11/20/2009